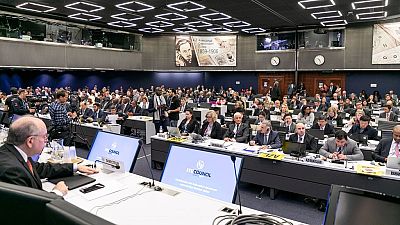 Ethiopia was last week chosen as hosts of the next World Telecommunication Development Conference, WTDC. The event takes place in 2021 and will be the first time an African country is hosting it.

WTDC is under the auspices of the International Telecommunication Union, ITU. ITU’s 2019 Council meeting in Geneva approved the choice of Ethiopia unanimously according to Getahun Mekuria, Minister of Innovation and Technology, who was in Geneva.

WTDC happens every 4 years, but has never happened in Africa since established in 1994, the Minister added.

Ministry of Innovation and Technology, #MInT is humbled by the amazing support from all #ITU Member States for unanimously approving #Ethiopia 's request to hosting WTDC21. Since established in 1994, WTDC has never happened on African soil. “It is Time for Africa” pic.twitter.com/5tXBctjyeN

Incidentally, at the time the minister was tweeting the news of Ethiopia’s hosting rights, there was an internet block back home. The state-monopoly telecom operator only eight days later commented on the blackout.

Ethio Telecom short of giving a reason for the move apologized to subscribers and announced compensation packages for persons who were affected by the situation.

Even though the government has yet to comment on the issue, multiple reports said internet access was restricted in order to curb cheating in national exams which spanned all of last week and ended last Tuesday.

Ethiopia has in the past few months been beneficiary to major international meetings increasing the diplomatic and hospitality profile of its capital Addis Ababa, which is seat of the African Union and other United Nations offices.

Before May, the Prime Minister had announced that Ethiopia had been awarded hosting of the World Economic Forum, WEF, on Africa meeting for 2020. Abiy attended his first WEF meeting in Davos early this year.

Addis Ababa was earlier this month chosen to host the next gathering of world football governing body’s supreme legislative body, the FIFA Congress.

The announcement of the 70th FIFA Congress taking place in Addis Ababa was made at the end of the 69th Congress which took place in the French capital, Paris.

According to Chief of Staff of the AU Chairperson, the Congress will take place at the Union’s headquarters in May 2020.