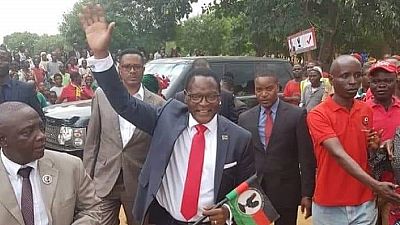 Local media in Malawi reported on Monday that opposition chief, Lazarus Chakwera, has been sworn in as a member of parliament in the capital Lilongwe following the May 21 elections.

The 64-year-old Chakwera who leads the Malawi Congress Party, MCP, was sworn in along with over 60 others at the Parliament Building. The swearing in for other lawmakers is set to continue today.

The Nation newspaper said Chakwera “took his oath of allegiance and office … amid cheers from scores of party supporters who accompanied him.” He is official the leader of opposition in Malawi.

The MCP is currently challenging the official outcome of the presidential vote which gave incumbent Peter Mutharika a second and final term in office whiles Chakwera came second.

We cannot continue to be aTipp Ex nation. Now it’s not just about who can become President, but setting our nation free & doing the right thing. Why can’t we run clean & fair elections in this country. pic.twitter.com/9NaKaJObTC