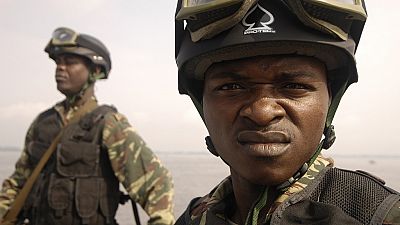 <p><strong>Bombs in Cameroon, Kenya and Somalia over the weekend killed at least 12 police officers, and injured dozens as authorities struggle to contain the Anglophone security crisis and the Al Shabaab insurgency respectively.</strong></p> <p>While authorities blamed the bombing in Cameroon on separatists from the English-speaking regions, the terrorist group Al Shabaab claimed responsibility for the bombs in Kenya and Somalia.</p> <h2 style="font-size:16px;">Cameroon’s separatists accused of detonating bomb</h2> <p>Cameroon’s government said on Sunday that separatists in its restive English-speaking region had detonated an improvised explosive device that killed four police and wounded six.</p> <p>“The government condemns in the strongest terms this criminal act, perpetrated by armed bandits and terrorists with no faith or law,” the statement said. It also said the attack occurred along a road near the district of Eyumojock in the south west of the country late on Saturday.</p> <p>There was no immediate reaction or claim of responsibility from any separatist group.</p> <p>It is rare but not unheard of for the separatists to use bomb technology, but this would mark their first deadly strike using a bomb.</p> <p>What began as peaceful protests in Cameroon’s southwestern Anglophone region in 2017 have degenerated into near daily violence between the forces of Cameroon’s mostly French-speaking government and several separatist groups.</p> <p>The English-speaking Northwest and Southwest of the country complain of being marginalised by the French speaking majority.</p> <p>Cameroon’s linguistic divide has existed since the end of World War One, when the League of Nations divided the former German colony of Kamerun, in central Africa, between allied victors, leaving most of Cameroon French-administered but a small part run by Britain.</p> <a style="font-size:16px; font-color:yellow;" href="https://www.africanews.com/2019/06/05/cameroon-govt-lacks-will-for-true-dialogue-over-anglophone-crisis-muna/"target="_blank"><span class="caps">READ</span> <span class="caps">MORE</span>: Cameroon govt lacks will for true dialogue over Anglophone crisis</a> <h2 style="font-size:16px;">Police officers killed in Kenya</h2> <p>Somali militants killed eight Kenyan police with a roadside bomb near the border between the two countries on Saturday, officials said.</p> <p>The vehicle that was hit by the roadside bomb was carrying 11 policemen, police spokesman Charles Owino told Reuters. A local official said eight were killed.</p> <p>“Eight bodies were found and taken to Wajir. Two were rescued, but they are in critical condition,” said Muhumed Ali Gedi, a member of the local community security team from Wajir who witnessed the rescue mission.</p> <p>Saturday’s attack came hardly 24 hours after three Kenyan police reservists were kidnapped from the same area, in Wajir district in northeast Kenya.</p> <p>Kenyan military forces have occupied part of southern Somalia along the border since 2011. The Kenyans, along with allied Somali militia, wrested control of the territory from al Shabaab jihadists after a spate of kidnappings on Kenyan soil.</p> <a style="font-size:16px; font-color:yellow;" href="https://www.africanews.com/2019/06/11/kenya-indefinitely-closes-border-with-somalia-trade-ban-imposed/"target="_blank"><span class="caps">ALSO</span> <span class="caps">READ</span>: Kenya indefinitely closes border with Somalia, trade ban imposed</a> <h2 style="font-size:16px;">8 killed, dozens injured in Mogadishu</h2> <p>Still on Saturday, al Shabaab detonated two bombs in Somalia’s capital, Mogadishu, killing at least eight people.</p> <p>Police said the first blast, at a busy junction known as K4, was a car bomb intercepted by security services that caused no casualties.</p> <p>The other blast killed eight people and injured 16, said Abdikadir Abdirahman, the director of Aamin ambulance service.</p> <p>Abdiasis Abu Musab, al Shabaab’s spokesman for military operations, said the group was responsible for the blast in Kenya and the two in Mogadishu.</p> <p>Al Shabaab is fighting the weak, U.N.-backed Somali government and its international allies in a quest to impose strict Islamic law.</p>