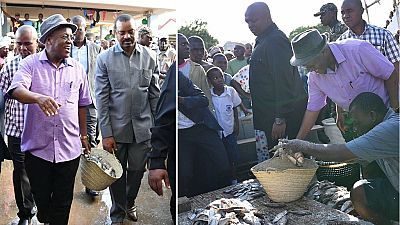 Tanzania president John Pombe Magufuli earlier this week made time to go fish shopping. He was pictured at a busy market in the commercial capital, Dar es Salaam.

In a few years time the country will be safe from the effects of plastic bags.

Reports indicate that plastic bags have long been the main option for selling fish and the effect of the ban was sure to impact trading but fishmongers are quickly adopting alternative carriers like paper, nylon bags etc.

Tanzania became the latest African country to enforce a full ban on plastics – starting over the weekend, June 1. The country joins over 30 other African states in a measure aimed at ending the environmental impact of plastics.

The mid-May statement announcing the ban read in part: “The Government of Tanzania wishes to make an official note to travelers planning to travel to Tanzania that from 1st June 2019 all plastic carrier bags, regardless of their thickness will be prohibited from being imported, exported, manufactured, sold, stored, supplied and used in mainland Tanzania.”