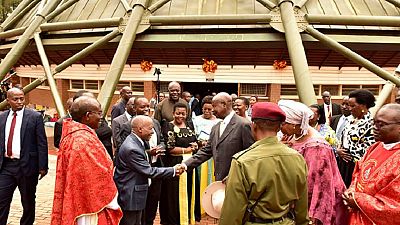 Uganda is playing host to millions of pilgrims, including from Tanzania, Kenya, Democratic Republic of Congo and world over, as it commemorates its martyrs of faith.

Every year on June 3, the 23 Anglican and 22 Catholic converts to Christianity who were executed on the orders of Kabaka Mwanga of Buganda between 31 January 1885 and 27 January 1887, are remembered at the Namugongo Martyrs shrines.

President Museveni, as has been the custom in recent years, used the occasion to eulogise Tanzania’s president Julius Nyerere, describing him as ‘one of the most important personalities in human history’.

“For about 4.5 million years ago, which the Western world labeled the dark ages of Africa’s underdevelopment, no African fought for the struggle of Africa’s unity and independence like Nyerere did. For us Ugandans, we are grateful,” he said.

Museveni was speaking at the annual Julius Kambarage Nyerere Day commemorative Mass at Namugongo Catholic Martyrs’ Shrine where over 500 Tanzanians gathered to pray for Nyerere’s beatification, canonisation and sainthood.

May God greatly reward those that have taken a long walk of faith to the venue #MartyrsDay19 pic.twitter.com/Dex18swx0Q

Uganda Martyrs are a great inspiration to those who seek the Lord! “But let justice roll on like a river, righteousness like a never failing stream” Amos 5:24
HAPPY MARTYRS DAY! pic.twitter.com/Ay7VUDJIeD

Happy Martyrs Day to you all. May the ultimate sacrifice made by the blessed Uganda Martyrs, in the service of Almighty God, continue to favour and protect our country for many years to come.

POPE FRANCIS: If, like the martyrs, we daily fan into flame the gift of the Spirit who dwells in our hearts, then we will surely become the missionary disciples which Christ calls us to be. #UgandaMartyrs