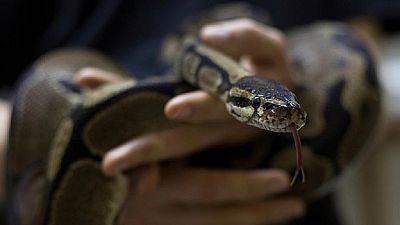 EFCC said Philomina Chieshe and five others had been found complicit over the issue hence their arraignment before a High Court judge in the Federal Capital Territory, Abuja.

Philomina, an accounts clerk with the state-run exams body, claimed in February 2018 that a snake had “spiritually” made away with 36 million naira cash ($100,000 plus).

Days later, the EFCC said it was going to “probe the issue:https://www.africanews.com/2018/02/14/nigeria-anti-graft-body-to-probe-how-snake-ate-over-100000-govt-funds/. It said on Twitter: “The Eagle shows no mercy for money-swallowing snake (s).”

The eagle denotes its main emblem. The EFCC’s official logo is of an eagle with the country’s coat of arms on it. The issue had Nigerians on social media expressing varying opinions from outrage, disbelief and mockery.

The missing funds belong to the country’s Joints Admissions and Matriculation Board (JAMB), a state agency responsible for the registration of admissions for people seeking to enter the various universities. JAMB has since suspended the clerk and vowed to unravel the mystery.

The incident took place at the JAMB offices in Makurdi, capital of Benue State where the clerk in answering audit queries said her housemaid and a fellow employee had confessed to ‘spiritually’ stealing the monies she kept in an office vault.

Auditors from the capital Abuja had been sent to take inventory of funds accrued over the sale of scratch cards to students hoping to gain access to JAMB’s website to register or check on the status of their admissions. The audit came up after reforms by the current registrar struck out use of the cards.

#Alert Philomina Chieshe who claimed that the missing N36 million JAMB proceeds in her custody was swallowed by a snake, will be arraigned on May 31, 2019 at a Fed. Capital Territory High Court, Maitama. Chieshe will be arraigned alongside five others. https://t.co/27xFZhshEs