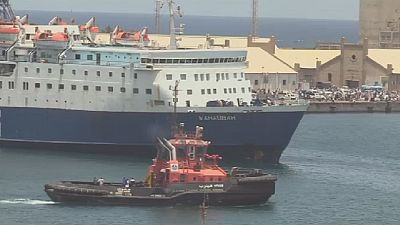 A political activist, Mohamed Al-Zaki, says that unlike Sudan’s earlier revolutions, protests started in the peripheries as opposed to the centre, specifically in the eastern province of the Red Sea and its ports.

“Port Sudan is among the first to participate in this revolution. It has a large and inspirational role, along with other states like al-Damazeen and Niyala. We can say that the revolution was launched from the edges of Sudan, and was later transported to the centre. This is opposed to the earlier revolutions, which started first from the centre and then spread to the edges of Sudan,” Al-Zaki added.

Port Sudan is among the first to participate in this revolution. It has a large and inspirational role.

Workers of the Sea Ports Corporation gathered at the headquarters, assembling outside the building, chanting and waving banners.

A member of the Sea Ports Corporation also said that the port has managed to bring in 9 million Euros since the 22nd and 23rd of March.

Sudan’s main protest group called for a general strike on Tuesday saying two late-night negotiation sessions with the military had failed to reach a deal on how to lead the country after the overthrow of former president Omar al-Bashir.

“A lot of countries observe the strategic issue of the Red Sea. They try to seize the ports for their own benefits, in order to meet its own strategic goal. They enter through the ports of the weak-hearted. Thank God, we are able to improve our condition. We ask the Military Council’s new government, which has put the agreement on hold (agreement allowing a company from the Philippines to purchase the southern port), to cancel the agreement. We want it to cancel the agreement,” said Head of Communications, Sea ports Corporation, sami Al-Sayegh.

Bashir, the former Islamist general under whose rule Sudan was placed on a U.S. list of sponsors of terrorism, was ousted by the army after months of protests against soaring prices, cash shortages and other economic hardships.