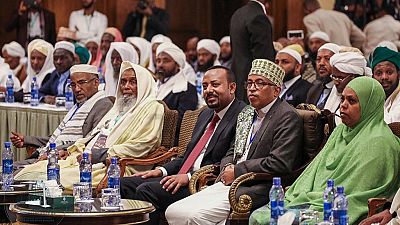 Prime Minister Abiy Ahmed on Wednesday (May 1) lauded the efforts of Ethiopian Muslims in ensuring national unity stressing the need for all and sundry to do more to guard the current peace.

Abiy was addressing a national gathering of Muslim leaders in the capital Addis Ababa as part of an ongoing conference that started last week.

In attendance was the national Muslim leadership and Ethiopia’s Minister of Peace Muferiat Kamil. The PM’s office said: “PM Abiy Ahmed emphasized that a strong Muslim community is the foundation for Ethiopia’s unity.”

Appealing to the community that small breakages need not facilitate disunity, he called upon all to distance themselves from hate and through the dialogue platform, create a structure and process that will strengthen harmony within the community, his office added.

In his remarks at the Ethiopian Muslims Ulama conference this morning PM Abiy Ahmed emphasized that a strong Muslim community is the foundation for Ethiopia’s unity. pic.twitter.com/78KlzvtThQ

The mélange of religions spans Christianity, Islam and a handful Jewish community. Christianity (Ethiopian Orthodoxy, Pentay, Catholic) accounts for over 62%, followed byIslam at 33.9%. The Jewish community and others share the remaining percentage.