One year on: Ethiopia PM lauded for promoting gender parity 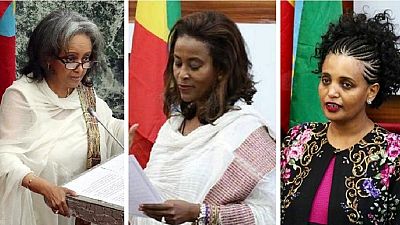 Women have been at the centre of Ahmed Abiy’s reign in a country which has long been considered as a patriarchal society.

Aside from his political reforms, he has taken great steps in promoting gender parity within the Ethiopian government, appointing women to top level positions in the country.

Abiy, first Oromo prime minister who was appointed in April 2018 after the resignation of Hailemariam Desalegn indicated that women were “less corrupt” and stand a better chance to advocate for peace in a country which has been plagued by unrest for years.

The reformist leader has taken credit for living up to his words to bring women to the forefront of his government as reflected in the following areas;

On October 18th, 2018, Abiy appointed a gender balanced cabinet comprising of 20 members. Prior to this move, the once 34 member parliament had only 4 women who held minor positions.

Abiy’s cabinet shakeup not only promoted a gender parity, but has women leading in strategic positions such as defense and security, trade, labor, culture, science, and revenue.

Aisha Mohammed was appointed Ethiopia’s defence minister and she became the first woman to hold that position while Muferiat Kamil, who was former speaker of parliament was named the first ever Minister of Peace.

Abiy made another laudable move when he appointed Meaza Ashenafi as the first female Chief Justice, a significant addition to his crew of women. She was appointed to the role barely two weeks after Abiy named 10 female ministers to his cabinet.

Prior to her appointment, Ashenafi who is the founder of the Ethiopian Women Lawyers Association was widely recognised for her work as a human rights activist.

The Ethiopian Prime Minister Abiy, leveraged on her vast international experience while indicating that she would be the perfect fit to “successfully implement demands made with regards to justice, democracy and change in our country.”

Ashenafi Meaza served as an adviser on women’s rights at the Addis Ababa-based United Nations Economic Commission for Africa and was formerly a judge on Ethiopia’s High Court from 1989 to 1992.

The former judge and opposition party leader Birtukan Mideksa was approved by Ethiopia’s House of People’s Representatives to lead the National Electoral Board of Ethiopia (NEBE), after Abiy Ahmed submitted her name as his only nominee for the position.

Birtukan was once one of Ethiopia’s high profile prisoners, jailed after the disputed elections of 2005 during which several people lost their lives. Her appointment came a few weeks after she returned to the country from exile in the United States.

Birtukan, is now tasked with leading efforts to organize the next vote scheduled for 2020 in the East African nation.

Before her appointment to the ceremonial position, Sahle-Work was the U.N. under-secretary general and special representative of the secretary general to the African Union. She had also served as Ethiopia’s ambassador to France, Djibouti, Senegal and the regional bloc, the Intergovernmental Authority on Development (IGAD).

The 68-year-old diplomat becomes the fourth president of Ethiopia and currently the lone female head of state in Africa.

Billene Seyoum also featured among the batch of women who were elevated by Abiy with her appointment as the Press Secretary at the office of Prime Minister before she was recently replaced by Nigusu Tilahun.

According to Abiy, all these women were strategically chosen for the positions based on their educational background and leadership skills.