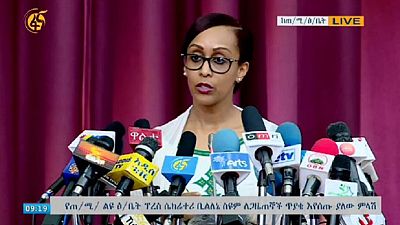 Ethiopia has a new goverment spokesperson as at Monday with the appointment of Billene Seyoum as Press Secretary at the office of Prime Minister Abiy Ahmed.

She is to be assited by another woman, as Helen Yosef, was also confirmed as deputy press secretary. Both Billene & Helen have extensive experiences in communications & journalism, the independently-owned Addis Standard reported.

The new press secretary held her first briefing for local and foreign journalists on Monday with reports that she announced the issuance of access badges for media operating within the PM’s office.

Until Billene’s appointment, government communications had almost become the job of Abiy’s former Chief of Staff, Fitsum Arega. The press secretariat is a new office under Abiy’s new chief of staff, Shimelis Abdissa.

Former holder of the post, Arega, is taking up a new post as Commissioner of Ethiopia Investment Commission, EIC.

I wanted to announce that I will be moving back to Ethiopian Investment Commission—as a Commissioner. I have enjoyed my time immensely as a Chief of Staff serving a historic Prime Minister who will no doubt transform the country for the better. #Ethiopia

Since taking office in April 2018, Abiy has undertaken widespread reforms that have earned him praise at home, across the subregion and internationally.

Lawmakers questioned the inclusion of women in his first cabinet to which he promised to make amends in subsequent appointments.

Before the praise could subside, he followed it up with the nomination of Ethiopia’s first female president in the person of Sahle-Work Zewde. Lawmakers voted unanimously for Zewde who replaced Mulatu Teshome.

On November 1, 2018; Abiy again nominated Meaza Ashenafi, as the country’s first female President of the federal Supreme Court. The recent appointment means there is no stopping the train of women empowerment with Abiy in the seat.