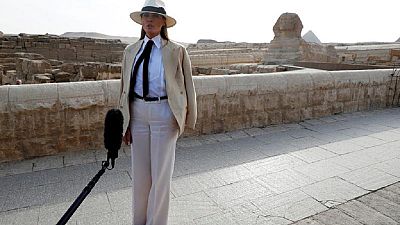 She started off in Ghana then to Malawi, Kenya and wound up her trip in Egypt where she met with President Al-Sisi and his wife, she visited the Great Pyramids before flying back home.

At the time, Trump tweeted twice about Melania. First, that Melania and Africa were loving each other beautifully, then summarizing the tour later, he said his wife had represented America very well with her engagements.

Six months on, Trump has made a strong case for Egyptian tourism stressing the hope that people troop to visit the structure because of how great and wonderful it was. According to him Melania – “as hard to impress as she is, was very impressed by her trip to the Pyramids.”

Trump was speaking during an official visit by his counterpart Al-Sisi to the White House on Tuesday for bilateral talks which centered on security and trade.

What Trump said about Melania’s trip and the Pyramids

Well, thank you.  And I just have to say, before we perhaps take a couple of questions, the First Lady was recently in Egypt.  She was treated beautifully.

But maybe even more importantly, what she saw with the Pyramids was — you could call it the seventh wonder or the eighth wonder of the world.

So hopefully a lot of people will be going and looking at them.  But she’s not easily impressed; she was very impressed.