Mozambique: Parents yearn for children torn away by cyclone 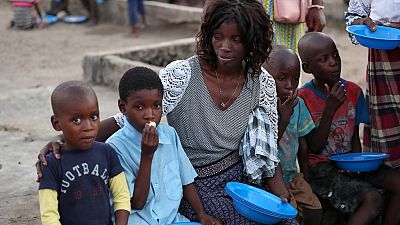 It has been more than a week since Virginia Samuel last saw two of her children.

Her family was marooned for four days in the stands of a basketball stadium after Cyclone Idai brought floods along the Buzi River in central Mozambique, where she lived.

A helicopter hoisted Samuel to safety with her two youngest boys, aged 5 and 6. But there was no room for her 12-year-old son and nine-year-old daughter.

She is haunted by the memory of them screaming for her as the helicopter flew away, leaving them behind with their grandmother.

“I have to pray to God, so I can see my mother and my children again,” she said, wiping tears with her patterned skirt at a camp for displaced people in the nearby port city of Beira.

Hers is a common plight in this part of Mozambique, where families were ripped apart in the chaos of the cyclone and floods across an area roughly the size of Luxembourg.

As many as 4,900 children may have been separated from their families, according to preliminary figures compiled by a group of United Nations and other humanitarian agencies.

Other survivors lost touch with husbands, wives and siblings. No one knows how many people remain unaccounted for two weeks after the storm hit on March 14.

From Mozambique, the cyclone ripped through neighbouring Zimbabwe and Malawi, flattening homes and causing deadly mudslides. At least 738 people were killed in the storm and heavy rains before it hit.

Entire villages were submerged, roads cut off and communications knocked out, complicating the search for missing loved ones.

While the floodwaters are now receding, tens of thousands of people remain in camps far from home, unable to contact those left behind.

Samuel, 25, made repeated trips to the beach-side community of Praia Nova, where boats were arriving daily with people fleeing the Buzi district, hoping for news of her children. But noone had seen them.

Even her sister, who reached Beira soon after Samuel, could not tell her where they were. The sister thought the children were with their mother, she said, sitting outside a school building, a son’s head resting in her lap.

Mozambique’s government, with help from the International Committee of the Red Cross (ICRC), has started deploying staff to dozens of makeshift camps to register the displaced and compile a list of the missing.

Unaccompanied children are referred to social services, who will place them in an orphanage and try to trace parents, said Jean Benoit Manhes, team leader for U.N. children’s agency UNICEF in Beira.

There is also a website, in English and Portuguese, where people in the three countries affected by the storm can report they are alive or someone is missing.

About 70 families have been reunited this way already, according to ICRC. But most people in the disaster zones do not have internet access, and the site has only 300 or so registered users, said Diana Araujo, who is leading ICRC’s reunification efforts in Mozambique.

The organization also has places in Beira where people can report a missing relative in person, a strategy it plans to deploy in other areas as they become more accessible.

Its site in Samuel’s camp near the airport consisted of little more than three plastic chairs, with a crumpled white tent lying on the floor, when Reuters visited on Tuesday. But people would soon be able to submit names there and charge their cell phones using solar-powered batteries, Araujo said.

“A LOT OF PEOPLE SUFFERED”

Tales of heartbreak abounded among the rows of tents set up on the grounds of a damaged school. Although there are no official figures yet, Araujo said there were many people who had lost touch with relatives at this camp alone.

Maria Bernardo, 25, said her only wish was to hug her husband again. The boat that rescued her from Buzi was charging 20 metical ($0.32) per person, more than the whole family could afford, she said.

She left with their three daughters, but her husband stayed behind. Her voice was hoarse when she described him.

“He’s short and fat … he’s a good person,” she said, recalling him with a laugh.

Janeiro Gabriel, 33, also from Buzi, was caught at a fish market when streets started to fill with water some 36 hours after the storm hit. He never made it home to his wife and three children, and has had no word from them since.

“I know that a lot of people suffered in Buzi,” he said. “But I don’t know how much my family suffered.”

He wants the government to help him get home to search for them. But officials in Mozambique, one of the world’s poorest countries, are overwhelmed with the task of getting food, water and shelter to hundreds of thousands in need.

Some areas were still not reached 10 days after the storm.

“The priority was urgent things,” Mozambique’s Environment Minister Celso Correia, who is overseeing the government’s response to the disaster, told Reuters when asked about separated families.

“Now we can start on the rest.”