A touch of Cape Verde paradise magic in Portugal 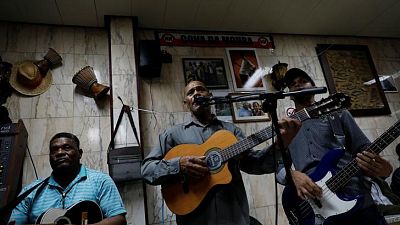 Cape Verdean immigrants have transformed one of the poorest and most neglected neighbourhoods in Portugal into a little piece of haven reminiscent of their island home nation of Cape Verde off Africa’s west coast.

Long considered a no-go area by Lisbon residents, Cova da Moura is a warren of small streets where Cape Verdeans make up two-thirds of the 6,000 residents. They celebrate their home, a tiny archipelago off Africa’s west coast, with music, food and street art – which tourists increasingly want to experience.

“Sometimes the only thing people know about Cova da Moura is the negative side,” said Paulo Cabral, 36, who was born locally to Cape Verdean parents. “But that isn’t the whole truth.”

Living in Cova da Moura is just like living in Cape Verde.

Sitting metres away from the tiny room where he grew up, Cabral, who now organises tours of Cova da Moura, said contact with its people helps change perceptions.

“When you visit once you keep on coming back.”

His tours cost 5 euros per person, and are most popular with tourists to Portugal, particularly from Germany. A typical Cape Verdean lunch on the tour costs 7.50 euros.

Cova da Moura’s simple brick and concrete dwellings stretch across 16 hectares of hills on the outskirts of the capital.

The area remains notorious within Portugal for its crime rate and a trial over alleged police brutality. Seventeen officers at a local police station have been charged with torture, kidnapping, falsifying reports and other crimes.

Police declined to comment as the trial is ongoing.

The magical sounds of paradise

Of an evening, Cova da Moura is alive with African beats and melodies. One of the musicians is Francisco Fortes. A bricklayer by day, the 56-year-old’s true passion emerges when he takes the stage at Coqueiro, one of the dozens of restaurants serving traditional food, to sing ‘morna’ ballads.

Madonna has had a home in Portugal since 2017.

“Living in Cova da Moura is just like living in Cape Verde,” Fortes said as he ate a richly-flavoured ‘cachupa’ stew.

The making of a paradise

In the streets, some named after Cape Verdean islands, graffiti paintings honour the country’s heroes, such as Amilcar Cabral, who fought against Portuguese colonial rule.

Now retired, 75-year-old Evaristo Marques, who was born in Cape Verde’s capital Praia, doesn’t see himself living anywhere else. “People can say whatever they want about Cova da Moura but I will only leave this place when I’m dead,” he said.

People like Evaristo started settling in Cova da Moura in the 1960s, but it was only in 1974, when the “Carnation Revolution” ended Portugal’s dictatorship, that the neighbourhood became a hub for migrants coming from the former colonies in Africa.

Migrants built illegal sheds and basic infrastructure, but there was no running water, sewage or electricity. Now sturdy two- or three-storey houses have replaced wooden shacks and the muddy streets have been paved. Poverty is still visible, with most residents employed as construction and domestic workers.

A 2017 United Nations report found that those from former colonies living in Portugal are among the poorest and are deprived in terms of access to adequate housing.

“People may be poor here but they have big hearts and preserving culture is part of who we are,” Cabral said.