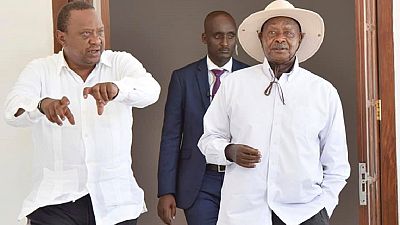 While citizens await the resolution of a diplomatic standoff between Uganda and Rwanda that has affected trade relations, president Yoweri Museveni on Wednesday secured bilateral deals with his Kenyan counterpart, Uhuru Kenyatta.

Museveni, who is on a three-day state visit in Uganda’s neighbour to the East, met politicians and traders in the coastal city of Mombasa.

‘‘President Uhuru Kenyatta and I led our different delegations into bilateral discussions where we covered a lot of ground, especially on matters trade and politics,’‘ Museveni tweeted after arriving in Mombasa.

I must commend him for his Pan-African credentials and working tirelessly towards easing trade between Kenya and Uganda.

The two leaders announced several agreements that will benefit the business community and citizens in Uganda and Kenya, including;

‘‘I must commend him for his Pan-African credentials and working tirelessly towards easing trade between Kenya and Uganda,’‘ Museveni said of his counterpart.

President Kenyatta addressed the outstanding border dispute between the countries over the Lake Victoria island of Migingo, explaining that a formal border commission will be set up to address the matter.

‘‘Lake Victoria is an important trans-boundary resource that has continued to support the livelihoods of our people, not just in Kenya and Uganda but the entire East African region,’‘ Kenyatta said.

Museveni is scheduled to take the train from Mombasa to Nairobi on Thursday, using the Standard Gauge Railway.

‘‘It should take me only four hours on a journey of over 480kms. Apparently, I will be the first visiting head of state to use this facility. I am honoured.’‘