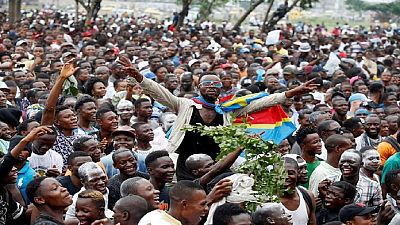 <p>Former Democratic Republic of Congo President Joseph Kabila’s coalition won a clear majority in senate elections on Friday, officials said, further undermining his successor Felix Tshisekedi’s ability to govern independently.</p> <p>Opposition leader Tshisekedi won a surprise victory in the presidential election on Dec. 30 over Kabila’s hand-picked candidate, Emmanuel Ramazani Shadary. Kabila was barred by term limits from standing for a new term after 18 years in power.</p> <p>But Kabila’s Common Front for Congo (<span class="caps">FCC</span>) coalition won about 70 percent of seats in the lower house of parliament and an overwhelming majority of provincial assembly seats in elections also held on Dec. 30.</p> <p>In a statement, <span class="caps">FCC</span> national coordinator Nehemie Mwilanya said the coalition had won more than two-thirds of the 109 seats in the senate, or upper chamber, in Friday’s elections, in which only provincial assembly members can vote.</p> <p>“The Common Front for Congo, which hails this resounding victory, confirms its supremacy as the premier political force in Democratic Republic of Congo,” Mwilanya said.</p> <p>Jean-Baudouin Mayo, an official from Tshisekedi’s <span class="caps">CACH</span> coalition, acknowledged that the <span class="caps">FCC</span> had won a clear majority.</p> <p>In addition to the 108 elected senators, Kabila automatically gets a seat in the upper chamber under Congo’s constitution as a former president.</p> <p><strong><span class="caps">KABILA</span> <span class="caps">INFLUENCE</span></strong></p> <p>The results of the parliamentary and provincial elections suggest Kabila will retain significant influence in Congo, a vast, mineral-rich central African country of about 80 million people.</p> <p>During the presidential election campaign, Tshisekedi promised to make a clean break with Kabila’s tenure, which was marked by persistent corruption, deadly militia violence in the east and prodigious production of copper and cobalt that nevertheless failed to significantly improve living conditions.</p> <p>Supporters of his opponent, Martin Fayulu, have accused Tshisekedi of striking a deal with Kabila to rig the presidential election when it became clear Kabila’s preferred candidate could not win.</p> <p>Tshisekedi and Kabila’s camps both deny the election was rigged but acknowledge they are engaged in talks about cabinet appointments under a power-sharing deal in line with Congo’s semi-presidential system.</p> <p>Friday’s senate elections have been marred by widespread accusations of corruption. About 20 candidates from across the political spectrum withdrew from their races over what they said were demands for bribes of tens of thousands of dollars.</p> <p>Congo’s attorney general asked the electoral commission to postpone the vote over the allegations but it declined to do so.</p> <p>Although Tshisekedi took office in January in Congo’s first-ever transfer of power via the ballot box, Kabila’s cabinet minister are still in place as negotiations over the nomination of a prime minister proceed.</p> <p>Tshisekedi has made some breaks with Kabila-era policies, most recently by announcing on Tuesday that he would free three prominent political prisoners and 700 others jailed under his predecessor’s administration.</p> <p><strong><em><span class="caps">REUTERS</span></em></strong></p>