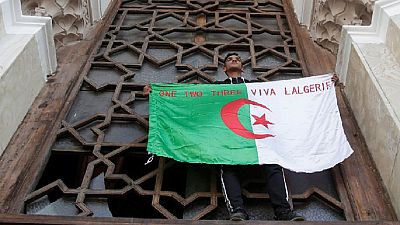 A total of 75 protesters were arrested and 11 policemen were slightly injured in demonstrations in the Algerian capital on Friday, police said.

Hundreds of thousands of people crammed into central Algiers on Friday in the biggest protests against President Abdelaziz Bouteflika’s 20-year rule since unrest began last month.

Hundreds wielding placards and chanting slogans massed up at the capital’s landmark Grand Poste square with the demand that the president of two-decades, Abdelaziz Boutaflika leave office.

It is the fourth consecutive Friday that protests have rocked the capital. Ailing Bouteflika announced on Monday that he was not going to seek a fifth term in office.

But elections slated for April were also postponed indefinitely leaving most activists to speculate that the president and allies were doing all it takes to stay in power beyond his mandate.

Remarks by Hocine Kheldoun, a leading member of the ruling FLN is an indication that top Bouteflika allies are turning their backs on the ailing leader.

Speaking to Ennahar television late on Thursday, Kheldoun, a former spokesman for the ruling party, said the party had to look forward and support the aims of demonstrators protesting against Bouteflika.

The FLN holds the majority in all elected assemblies, including parliament and local city councils.

Tens of thousands of Algerians have staged protests for weeks demanding a new era with younger leaders who would offer greater social freedoms and prosperity.

Bouteflika, 82, has rarely been seen in public since suffering a stroke in 2013, and the protesters say he is no longer in a fit state to rule. They took to the streets after Bouteflika, in office for 20 years, announced he would stand again, forcing him to reverse that decision this week.