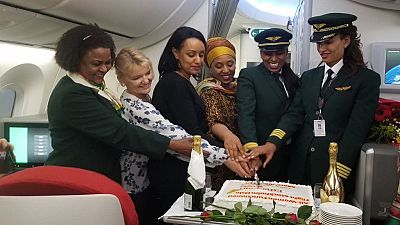 Africa’s biggest and most profitable airline, Ethiopian Airlines, on Friday celebrated the 2019 International Women’s Day, IWD, with an all female operated flight to the Norwegian capital, Oslo.

The Stockholm – Oslo flight arrived in Norway in the morning of Friday (March 8) and was received by diplomats and the Ethiopian community in the country, the airline said.

A select group of the women cut a cake on board the flight and popped champagne to much applause. The cake bore the inscription: “All-Women Functioned Flight – Stockholm Oslo.”

It is not the first time the airline has operated such a flight. In March 2018, a similar flight between Addis Ababa and the Argentine capital, Buenos Aires was undertaken.

Ethiopian Airlines #Allwomenoperated flight to Oslo has just arrived and Received a warm welcome by Diplomats and Ethiopian Community in Norway. pic.twitter.com/KBC6acrx7v

The airline currently flies to over 50 African cities in what is the largest network by a national carrier. It is also in talks to help about a dozen African countries to establish and manage their carriers.

It is the first African operator to take delivery of the Boeing 787-9 dreamliner. Its operations have transformed the Bole International Airport in Addis Ababa into a continental hub.