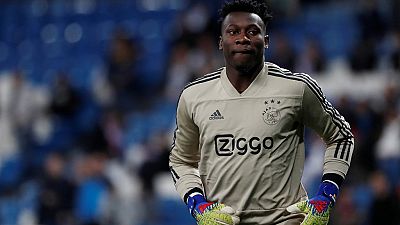 At age 22, Cameroonian international Andre Onana is making it big in the top ranks of European football. One would say he is not in the top five leagues i.e. England, Spain, Italy, Germany and France.

Fair point, but he is with a side known to be giants in Europe – Dutch side Ajax Amsterdam.

His exploits became even more outstanding on Tuesday night (March 5) against no mean a side as Real Madrid, defending – maybe ousted – champions of the UEFA Champions League, UCL.

Onana lasted the entire duration of Ajax’s trip to Madrid for a second-leg tie in the round-of-sixteen fixture. Despite conceding a goal, his team’s emphatic win helped them through to the quarter-finals. He described the victory as a ‘special night to remember in Madrid.’

Ajax thrashed the UCL record winners 4-1 and by that overturned a first-leg deficit to reach the quarter-finals 5-3 on aggregate.

A special AFCAjax night to remember in Madrid ?
We dreamed of this result & achieved the unthinkable ??
Quarter Finals here we come ?#UCL #reaaja pic.twitter.com/cU8agMlmw8

Onana was not the only African to hurt Madrid. Ajax’s first goal was by Moroccan midfielder Hakim Ziyech who hit a shock seventh-minute lead after a lay off from the outstanding Dusan Tadic.

Tadic also provided the pass for David Neres to double the Dutch side’s advantage in the 18th. Madrid were without suspended captain Sergio Ramos. They hit the woodwork twice in the first half.

On resumption from the break, they came out stronger but conceded a third at the foot of Tadic when the Serbia international crowned his sensational display by hammering into the top corner in the 62nd minute.

Substitute Marco Asensio gave Madrid a glimmer of hope by striking back but it was quickly extinguished by a breathtaking free kick from Lasse Schone, condemning Real to a fourth consecutive home defeat in all competitions.

Things got worse for the hosts, who had won the last three Champions League titles in a row, when Nacho was sent off in stoppage time for two bookings.