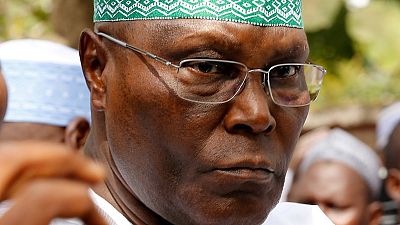 The former vice president took to Twitter to decry arrest of two allies, his son-in-law and lawyer. He said the two had been arrested because: “They are paying the price for supporting me.”

Local media reported that the duo were being held by the anti-graft body, Economic and Financial Crimes Commission, EFCC. The EFCC has yet to comment on the issue.

According to The Cable news portal, EFCC officials on Saturday arrested Atiku’s in-law Babalele Abdullahi, who serves as finance director of Atiku’s group of companies.

The operatives were said to have searched his residence as well as his office before arresting him. Days to the February 23 polls, Atiku’s lawyer Uyiekpen Giwa-Osagie was also picked by the anti-graft agency for alleged money laundering.

My son in law and lawyer have been detained, one for 3 weeks and the other recently. They are paying the price for supporting me. I urge those now persecuting them to remember that a government’s mandate is to pursue peace and justice for all, and not just those who support them.

Atiku has rejected the outcome of the elections despite losing by close to four million votes to incumbent Muhammadu Buhari. Over the weekend, he announced a legal team set to challenge the results in court.

Atiku was an ally of Buhari in the then opposition coalition that defeated incumbent Goodluck Jonathan in 2015. He left the All Progressives Congress, APC, and rejoined the Peoples Democratic Party, PDP, and won the bid to represent it in the polls.

His previous record in the PDP was when he served as vice president for eight years under the first PDP president Olusegun Obasanjo. Atiku has since 2007 eyed the presidency but failed at each turn.