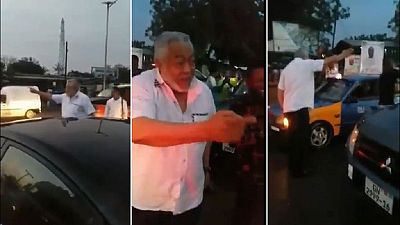 <p>On Ghana’s social media sphere, there is a viral video making the rounds with an ex-president directing vehicular traffic.</p> <p>Jerry John Rawlings who governed Ghana for over two decades is seen in the video ‘working’ hard to decongest traffic at a busy intersection.</p> <p>People who gathered around him are seen hailing his efforts with the usual refrain of ‘Papa J, Papa J.’ Reports said the incident happened at Prampram, a coastal town in the Greater Accra Region.</p> <blockquote class="twitter-tweet" data-lang="en"><p lang="en" dir="ltr"><span class="caps">VIDEO</span>: There was one guy here writing big English as usual, that it wasn’t former President Rawlings directing traffic. <a href="https://t.co/oiWAnAq5aK">pic.twitter.com/oiWAnAq5aK</a></p>— Saddick Adams (@SaddickAdams) <a href="https://twitter.com/SaddickAdams/status/1100116603256098818?ref_src=twsrc%5Etfw">February 25, 2019</a></blockquote> <script async src="https://platform.twitter.com/widgets.js" charset="utf-8"></script> Popularly referred to as JJ – his initials Jerry John, he ruled Ghana as a military ruler and then led the transition into multi-party democracy in 1992. He won two terms as a civilian president between 1992 – 2000. <p>He is one of the most divisive characters in Ghana’s politics. Many accuse him of military era atrocities as much as others credit him for the return to democracy. He is founder of the main opposition National Democratic Congress, <span class="caps">NDC</span>.</p>