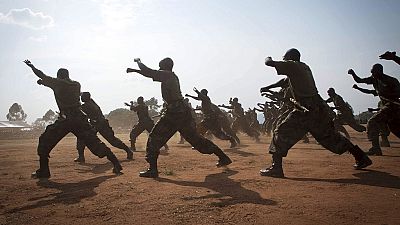 Uganda’s army spokesperson on Sunday issued a statement apologising to a traffic police sergeant who was assaulted by soldiers along the highway leading to the capital Kampala.

Ugandans on social media had reacted with shock when pictures and videos emerged of a traffic police officer being manhandled by the military escort of Uganda’s ambassador to Burundi, Major General Matayo Kyaligonza (Rtd).

‘‘It is very regrettable and apologies to our police sister.UPDF and UPF are establishing the facts .Findings will guide action to be taken,’‘ said defence spokesperson Brigadier Richard Karemire.

'It is very regrettable and apologies to our police sister.

Karemire added that the leadership of the two institutions would resolve the matter.

A journalist working with the national broadcaster, Peter Otai, also posted on Twitter saying, he was assaulted by the soldiers for questioning their actions.

AKasingye if this is what we are preaching in this country then we are doomed. I was beaten by the same updf men because I told them what they where doing was wrong pic.twitter.com/QbnzboHRux

Video: #Uganda‘s Ambassador to Burundi, Maj Gen Matayo Kyaligonza with his military guards assaulting a yet-to-be named female traffic officer who stopped them after they made a wrongful U-turn in Seeta, Mukono today, Sunday pic.twitter.com/qsh86XXBzv

Let’s get this right ladies and gentlemen. Brig. Matia Kyaligonza is a Diplomat with no single entitlement to right of way. He flouts traffic rules then commands his guards to assault a traffic cop on duty. What sort of arrogance and impunity is this, Sir??????? pic.twitter.com/8eqkQVUmCQ

What insolence; terrible and shameful. Kyaligonza must be recalled from his current posting as Uganda’s ambassador to Burundi…and charged along with escorts with aggravated assault… https://t.co/2KBPLqQddm