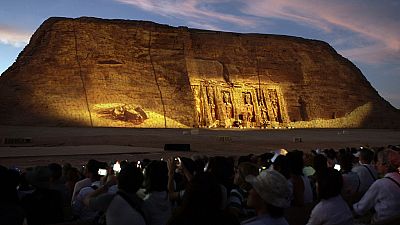 Egypt on Friday hosted several diplomats from African countries, who joined spectators watching the sun’s dawn rays light up the statue of Pharaoh Ramses II at the country’s Abu Simbel temples, a phenomenon that occurs twice a year.

The visit by Egyptian officials and a raft of ambassadors from around the continent was part of efforts to boost tourism hit by years of turmoil since a 2011 uprising.

It comes after President Abdel Fattah al-Sisi assumed the chair of the African Union earlier this month, looking to boost Cairo’s influence in the region.

Egypt is also gearing up to host the showcase Africa Cup of Nations football tournament in the summer.

Beams of sunlight peeked through the dark chamber of the Great Temple of Ramses II illuminating the pharaoh’s statue, as they do every year on February 22 and October 22.

Historians believe the 3,000 year-old temple’s solar alignment was meant to mark the ancient king’s birth and his coronation.

The Abu Simbel temples, built during the rule of Ramses II in the 19th dynasty, sit on the western bank of the Nile River in Egypt’s south.

The ancient complex, carved out of cliffs overlooking the Nile, was rescued from the river’s rising waters about 50 years ago.