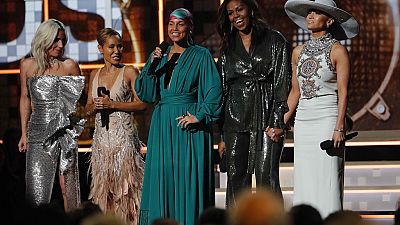 Rap and women won big at this year’s Grammys Awards held on Sunday, as Childish Gambino’s ‘This is America’ won record and song of the year, while Kacey Musgraves took home the Album of the Year accolade.

‘This is America’ became the first hip hop track to win either of the top Grammy categories in 61 years.

However, Childish Gambino, the music alter ego of actor Donald Glover, was not around to accept the honor.

Both Glover and leading nominee Kendrick Lamar were Grammy no-shows in what was seen as a snub by the rappers for past disappointments when socially incisive rap material lost out to pop or R&B at the highest honors in the music business.

“I really wish he (Glover) was here right now. All of this was his vision and he deserves this credit,” said songwriter Ludwig Goransson, who worked with Glover on the track.

“It speaks to people, it calls out injustice, celebrates life and reunites us all at the same time,” Goransson said, accepting the award on Glover’s behalf.

The album of the year Grammy went to Musgraves for “Golden Hour,” reflecting a show and a year that was dominated by female performers and winners across multiple genres.

“I would have nothing without songs. It’s all about the songs,” said Musgraves, who also won three other Grammys.

Popular rapper Cardi B, who wore a black and silver mesh body suit to perform her song “Money,” won her first Grammy, taking best rap album for “Invasion of Privacy.”

Keys became the first woman to anchor the show in 14 years.

The Recording Academy behind the awards gala has faced a barrage of criticism for not embracing diversity within its ranks, after nearly muting women nominees at the show last year.

The Grammys sprang another surprise by bringing on former U.S. first lady Michelle Obama for an opening segment in which she joined Lady Gaga, Keys, Lopez and actress Jada Pinkett Smith to talk about the power of music.

“From the Motown records I wore out on the (Chicago) Southside to the ‘Who Run the World’ songs that fueled me through this last decade, music has always helped me tell my story,” Obama told the cheering celebrity audience in Los Angeles.

This is the third time the group is bring a Grammy back home to Africa, having won the 2007 and 2008 Grammy Award for Best Traditional World Music Album for their Blessed and African Spirit albums respectively.