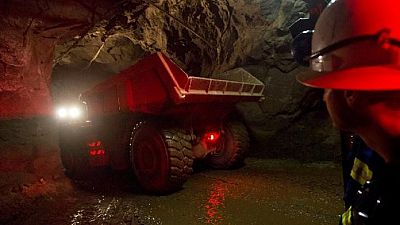 Zambia is determined to enforce a new 5 percent copper import duty, as part of a plan to keep a greater share of mineral resource profits for the country and tackle its debt, Mining Minister Richard Musukwa said.

Musukwa was speaking on the sidelines of the Indaba mining conference in Cape Town, where government ministers and mining executives are debating how to attract investment and how to strike the right balance between resource-holding governments and foreign companies.

We appreciate that the investors are bringing in resources. They are bringing in expertise. We keep a small percentage for checks and balances and currently it sits around 15 to 20 percent. We have no plans to increase beyond those measures.

Vedanta has said it would suspend operations in Zambia, although the minister said it had yet to do so, while Barrick has said it is exploring options for its Zambian copper mine. Vedanta declined to comment on Monday.

Musukwa said he was open to dialogue with the international miners and Zambia, Africa’s second-biggest copper producer, would remain a stable investment regime with no plans to increase state ownership.

“We appreciate that the investors are bringing in resources. They are bringing in expertise. We keep a small percentage for checks and balances and currently it sits around 15 to 20 percent. We have no plans to increase beyond those measures,” he told Reuters in an interview.

The new taxes, which also include a royalty on copper production that increases as commodity prices rise, were “well-thought-out and logically calculated with the inputs of stakeholders, even the mining companies”, he said.

Most miners had accepted them, he said, but he was talking to mining executives, including the CEO of Barrick, in Cape Town about some of their concerns.

“The government is open for discussion. These taxes are not meant to be one size fits all,” he said, while saying he was determined to stick with a tax on imported copper concentrate produced from rough ore.

“As we see it, the government is resolved that mining houses have to pay for that,” he said, referring to the 5 percent import levy.

“They don’t need to import. They must develop their licences. They must employ our people and improve our economic performance.”

Mark Bristow, CEO of Barrick Gold Corp, told reporters in Cape Town the new taxes had put its Zambian copper mine “under pressure”.

“Zambia should be a preferred place for investors to go and mine copper,” he said.