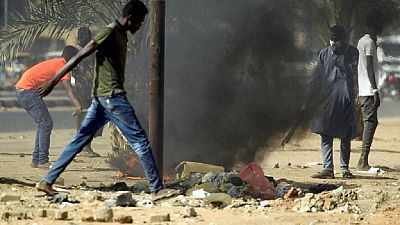 Sudan’s prime minister on Saturday appeared to soften the official stance on more than a month of anti-government protests, describing demonstrators’ calls for better living conditions as “legitimate”.

Students, activists and other protesters have held almost daily demonstrations across Sudan since Dec. 19, calling for an end to economic hardships and mounting a sustained challenge to President Omar al-Bashir’s three decades in power.

Rights groups say at least 45 people have been killed in the protests, while the government puts the death toll at 30, including two security personnel.

In the latest unrest-related death, a school teacher died in detention after being arrested in connection with protests in the east of the country, members of his family said on Saturday.

Bashir has shown no sign of being prepared to concede any power and has blamed the protests on foreign agents, challenging his rivals to seek power through the ballot box.

But Prime Minister Moataz Moussa took a softer tone, saying some of the demands of the protesters were legitimate and must be respected.

“There are problems and we are working on solving them,” he told reporters, referring to Sudan’s economic troubles and lack of services.

“There is a voice that must be heard and must be respected, despite the presence of political parties. There are legitimate demands and demands that must be expressed.”

Sudan has been rapidly expanding its money supply in an attempt to finance its budget deficit. But that has caused spiralling inflation and a steep decline in the value of the country’s currency on foreign exchange markets.

The 36-year-old teacher reported dead on Saturday had been arrested at his home on Thursday after protests in the town of Khashm al-Qirba, in the east of the country, the family members said. They added that security officials had told them he died of poisoning.

He had marks of being beaten on his body, the family said. The man’s funeral took place on Saturday.

Security officials did not immediately respond to requests for comment.

The information ministry said on Tuesday Sudan’s intelligence and security chief had ordered the release of all those detained during the protests. However, the next day security forces detained the daughter of opposition leader Sadiq al-Mahdi, her family said.

Bashir is wanted by the International Criminal Court over charges, which he denies, of masterminding genocide in the Darfur region. He has been lobbying to have Sudan removed from a list of countries, along with Syria, Iran and North Korea, that Washington considers state sponsors of terrorism.

That listing has deterred the influx of investment and financial aid that Sudan was hoping for when the United States lifted sanctions in 2017, economists say.