South African artist gets the picture by tapping her roots 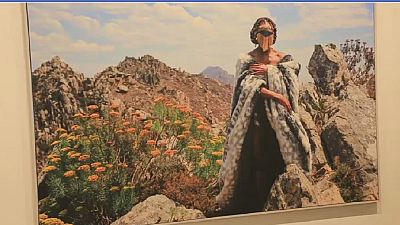 “Falling”, a song about stone birds, captured and released in Great Zimbabwe, with the exception of one.

The song is performed by 27-year-old artist Sethembile Msezane who also happens to be a professional photographer.

At the Tyburn Gallery in London she opens her first solo exhibition entitled “Speaking through Walls”.

Nine photographic works from South Africa and Zimbabwe are on display under the theme dreams and ancestral worship.

“Showing my work here in London means that there is a different audience, but that doesn’t mean that people can’t necessarily connect to that work. And in the work, you know, there are people who find their own humanity, who feel loneliness in a landscape, but also who find themselves and capture the reflections that occur in these spaces. And so, I don’t think showing it in a different context means that the message won’t be heard.”

Images showing either South Africa or Zimbabwe have been widely distributed in both countries, but with a wider appeal. Sethembile says that the deeper philosophical ideas of solitude and reflections in different settings transcend geography.

Two photographs, entitled ‘Water Body – Ishinquomo I and II’, show the living Sethembile accompanied by her spirit embodiment in a boat, on a body of water – free from all connection with a particular country.

The artist may not be a spiritual medium in the usual sense of the word, but her encounters with her own ancestors, whether in dreams or in her daily life, inform much of her work.

The general themes of his work are mostly influenced by dreams and spiritual encounters.