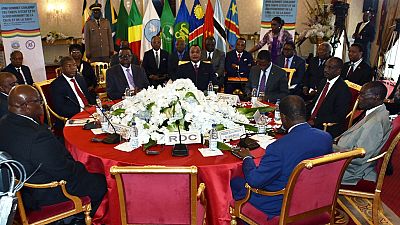 The Southern African Development Community on Sunday congratulated President-elect Felix Tshisekedi and Congo for conducting elections in a peaceful manner “despite the security and logistical challenges.”

The 16-nation regional bloc had last week called for a unity government and possible recount.

#SADC congratulates President-Elect of #DRCongo, Mr Felix Tshisekedi & calls upon all stakeholders to support the President-elect & his Government in maintaining unity, peace & stability; and in attaining socio-economic development in the country https://t.co/4n4ZITndpi pic.twitter.com/v8448yWg2S

The group “calls upon all Congolese to accept the outcome, and consolidate democracy and maintain a peaceful and stable environment following the landmark elections.” The body called on “all stakeholders to support the President-elect and his government in maintaining unity, peace and stability; and attaining socio-economic development in DRC (Congo). SADC looks forward to a peaceful transfer of power to the President-elect.”

“I congratulate HE. Felix Tshisekedi on his election as President of the DRC (Congo). While congratulating all the Congolese, I beseech you to maintain peace and affirm my commitment to furthering our historic and brotherly ties,” he wrote.

Following the judgement by the High Constitutional Court. I congratulate HE. Felix Tshisekedi on his election as President of the DRC. While congratulating all the Congolese, I beseech you to maintain peace and affirm my commitment to furthering our historic and brotherly ties.

“Through a fully organized electoral process without outside influence and the wisdom of President Kabila, Congo has just defended its dignity and sovereignty. #Burundi congratulates the elected President, HE Felix A. Tshisekedi and the step taken by the Congolese people. “

Tshisekedi’s supporters celebrated the court decision, announced early Sunday, by driving their motorcycles and cars in a procession through Kinshasa. Later the capital city was quiet, with people attending church. Other cities across Congo were also reported to be quiet.

Ramaphosa & SADC quick to congratulate Tshisekedi as new president, effectively the AU heads of state mission that was due to arrive tomorrow #DRC #RDC #DRCongoElections2018 https://t.co/2MQXCzDaWT

But Fayulu’s declaration that he is Congo’s “only legitimate president” and call for the Congolese people to peacefully protest what he called a “constitutional coup d’etat” threatened to keep the country in a political crisis that has been simmering since the Dec. 30 elections.

Tshisekedi welcomed the court’s decision confirming him as the winner of the presidential election saying it was a victory for the entire country.

I now consider myself as the sole legitimate President-elect of the #DRC. Therefore, I ask the Congolese people not to recognize any individual who would claim this authority illegally nor to obey orders that would emanate from such a person. #RDCVote #DRCElections pic.twitter.com/V2UaHm3A8L

Thread #DRC These are very strong words from #Fayulu. A direct challenge to #Tshisekedi and by extension #Kabila who still controls all significant levers of power https://t.co/dbyBO5zPWa