Greatest of All Time: Ferderer, Serena praise each other after historic clash 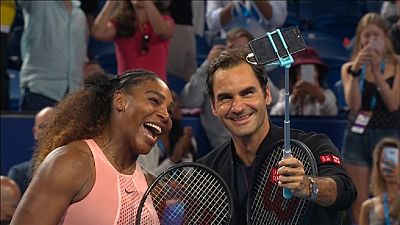 With a combined 43 Grand Slam triumphs between them, Roger Federer and Serena Williams have been the best tennis players in the world over the past two decades, and on Tuesday, they finally faced off on court, giving the capacity crowd at Perth a night to remember.

Federer’s Switzerland beat Serena’s U.S. 4-2 4-3(3) in the mixed doubles decider at the Hopman Cup on Tuesday.

The duo hailed each other in the post-match interview before the tennis titans captured the iconic moment in what Hopman Cup on Twitter described as the ‘greatest selfie of all time’.

He’s the greatest of all time, to be honest.

“He’s the greatest of all time, to be honest.” 23-times Grand Slam winner Williams said. “It was so fun to do this at the pinnacle of our careers.

“Both on and off the court, he has such charisma, he’s such a wonderful player. Maybe I could get some tips from him later on.”

Federer and Williams have won a combined 171 career titles and have spent over 600 weeks at world number one.

What Federer loves about Serena

Federer also posted the picture on social media, with the caption, “Oh what a night.”

“It was great fun,” Federer added of the match. “You see how determined and focused she is, and I love that about her.”

Federer: I was nervous returning because people talk about her serve so much and I see why. Her serve is so great you can’t read it.

Serena: I can’t read yours either

It’s just a nice Tennis love-fest for these two.pic.twitter.com/ISDN1DEaQZ #HopmanCup