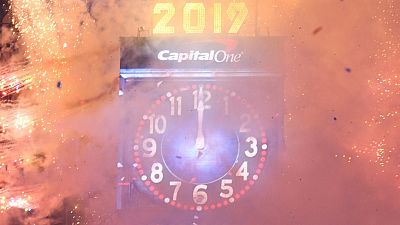 Several African presidents addressed their citizens on the eve of a new year, outlining the priorities their governments will address in 2019.

The new year is traditionally viewed as an opportunity for individuals and institutions to reflect upon the past year, and set resolutions for the forthcoming 12 months.

In this article, we sample some New Year Messages from different heads of state, across the continent.

Wishing you all a year of peace and prosperity.

Chad’s President Idriss Deby pledged to ensure that the the long-delayed legislative and local elections in the central African state will be held in the first half of 2019.

“The year 2019 will be marked by the holding of legislative and local elections,” Deby, who has ruled the country with an iron fist since 1990, said in his New Year’s address.

It will be the oil-rich state’s first legislative elections since 2011. The vote had originally been scheduled for 2015, but due to delays, the sitting parliament’s mandate was extended by a constitutional law.

Deby is also hoping for an end to the country’s financial crisis, which was caused mainly by the slide in the price of crude oil in 2014-2015.

“The coming year will be pivotal in the battle to structurally transform our economy,” Deby added.

Cameroon’s president, Paul Biya also addressed the nation on Monday, focusing his speech on the ongoing Anglophone crisis in the Northwest and Southwest regions.

Biya, who was elected last year to serve a seventh term, pledged to ‘quickly’ resolve the conflict with the English-speaking secessionists.

He pledged to dialogue with persons of goodwill to end the crisis, or instruct the army to neutralise the rebels, if his call for dialogue went unheeded.

In an address that focused on reviewing the progress made by his government, president Yoweri Museveni, outlined achievements made in growing the economy, empowering the youth and fighting crime.

He also emphasised ‘the issue of African integration in order to guarantee our prosperity’, explaining that goods and services produced in Uganda need a ‘big market’ that will absorb them.

‘‘Therefore, in 2019, I hope to work with the fraternal peoples of Kenya, Tanzania, Rwanda, Burundi and South Sudan to consolidate the unity of East Africa,’‘ Museveni said.

‘‘Additionally, through COMESA and AU, we shall work with the wider Africa to build the African Common Market.’‘

South Africa’s president, Cyril Ramaphosa, called upon all eligible citizens to register to vote in the forthcoming elections.

‘‘We urge all our people, particularly the youth, to register to vote, and exercise their responsibility as patriotic citizens of our great nation.’‘

It is my humble privilege, as the President of the Republic, to wish all #Kenyans and our Brothers and Sisters across the World, a Happy and Prosperous New Year. Thank You and God Bless the Republic of #Kenya.https://t.co/QqxGmb0UHU

A very happy new year to all Ethiopians in the Diaspora and at home as well as to the international community marking the start of 2019. Wishing you all a year of peace and prosperity.#PMOEthiopia