DRC elections: Queues and inconvenience for a historic vote 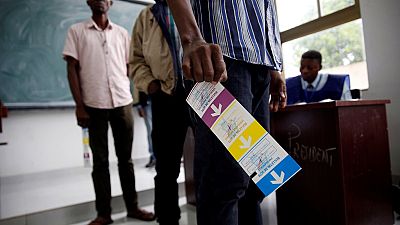 Queues grew as the day progressed at polling stations on Sunday in the Democratic Republic of Congo, where historic elections are being held, between hope for change, fear of further violence, delays and technical problems.

“It feels like a liberation. I feel free, free, clear,” Victor Balibwa, a 53-year-old civil servant, told AFP one of the first voters to cast his ballot in Lubumbashi at the opening of the polling stations at 06:00 (04:00 GMT).

Because Congo has suffered too much, we deserve change.

Three times postponed, these first-round general elections is meant to choose the successor of President Joseph Kabila, who has been in power since his father’s murder in January 2001.

#DRC : This morning President #Kabila votes ,surrounded by his wife and kids even those who are not allowed to vote #DRCElections pic.twitter.com/u6hqvkeaKy

This is the first time that Congolese voters have dreamed of a peaceful transfer of power from one president to another since independence in 1960.

They were followed an hour later by one of the two main opposition candidates, Martin Fayulu.

The other main opposition candidate, Felix Tshisekedi, is scheduled to vote around 2:00 p.m. (1:00 p.m.) in a popular area of the capital.

No major incidents have been reported so far in this huge country with a turbulent history, where voting has been postponed in two regions, officially due to violence (Beni-Butembo in the East and Yumbi in the West).

Poll on #DRC presidential election predicts that two leading opposition candidates will each obtain more votes than President Kabila's “heir” Shadary, who registers only 18%. If Shadary is declared the winner, he will be illegitimate and not recognized by anyone. https://t.co/CmrdYWAHPr

In Beni, young people organised a fictitious vote to protest. “The city of Beni is in the Democratic Republic of Congo. We cannot be deprived (of the right to vote,” claimed a young man, Manix.

There were many delays in polling centres where voters spend time searching for their names and offices on the voters’ lists.

The “voting machine” has been the subject of all controversy for more than a year, and there were some problems on election day.

Delaying natl elections in #Ebola hit region of #DRCongo = recipe for violent rage: >1M votes won't count.
“The pretext of Ebola is fallacious because there has been campaigning in these areas. It’s yet another strategy to hijack the truth of the polls.”https://t.co/CMi1gdFJVd

“There are five to six offices where the machines do not work” testified to the press in Lubumbashi a “witness” (observer of a candidate). “You have to wait for the technician.”

In an office in Kinshasa, the touch screen jammed on the second ballot paper, said an AFP journalist.

Voting “with the machine is very complicated. I supported it without really knowing for whom. I didn’t see the number or face of my candidate,” regrets an elderly woman as she walks out of the voting booth, which protects the secrecy of the vote.

The voters who were able to vote did not hide their enthusiasm and thirst for other horizons.

“Because Congo has suffered too much, we deserve change,” said Goma technician Patrice Nzanzu.

SUCH AN ELECTION HAS NEVER HAPPENED ANYWHERE! Not even our repeat one in Oct last year was as bad. A new DRC president will be sworn in mid January even though 1.2m will NOT vote till March! That means Kabila’s guy will win by at least that many votes. https://t.co/bsflsXMaSN

“It excites me to vote, to finally be able to choose. This is my first vote,” says Rachel, 18, a student in Goma, a country where the majority of the 80 million people are under 25 years of age.

In total, the 40 million registered voters have a choice of 21 candidates – most of whom have not even campaigned.

President Kabila has renounced to run for a third term of office by force, which is prohibited by the Constitution.

His decision was delayed, as the elections have been postponed three times since the end of his second term two years ago, in December 2016.

Guys are votes going to happen in DRC?? Im so anxious for them ? #DRCongoElections2018

The 40 million registered voters can vote until 17:00 (15:00 GMT in the East and 16:00 GMT in Kinshasa). The provisional results will be announced on 6 January, before inevitable litigation before the Constitutional Court.

Parliamentary and provincial elections are held at the same time as the presidential elections.

For these elections, Kinshasa refused any logistical assistance from the United Nations, which has been present in Congo for 20 years, as well as any Western observation mission.

On voting day, the government announced the closure of its land, lake and river borders with its nine neighbours, from Brazzaville to Angola and Rwanda.

On the other hand, the Internet was not cut off, unlike on days of high tension.

The campaign had been overtaken by violence, with about ten deaths according to a human rights association, which the government denies.

On Saturday evening, the two opposition candidates refused to sign a document aimed at preventing post-election violence, slamming the door on a mediation conducted by African observers.