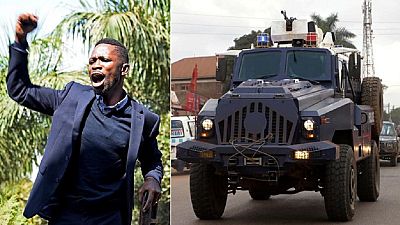 Ugandans online have reacted with dismay as the police apply what look like double standards to Bobi Wine and another popular musician holding Boxing Day concerts in the capital, Kampala.

While Bobi Wine, who is a musician and a legislator, is still struggling to secure permission to stage concerts and perform his music, another artist Bebe Cool, has received an endorsement for his show from president Yoweri Museveni himself.

Bobi Wine, who has been a fierce critic of Museveni’s government since he joined the parliament in 2017, has been prevented from staging concerts, by the police who claim he has failed to met certain requirements.

“We shall be at Busabala beach to disperse revellers because we shall be protecting them. As far as I’m concerned, this concert wasn’t cleared because the first things weren’t done,” police spokesperson Emilian Kayima said on Wednesday.

The police claim Bobi Wine did not formally apply for permission to stage a concert today, at the One Love Beach Busabala on the outskirts of Kampala. The property is owned by the 36-year-old lawmaker.

Bobi Wine had earlier taken to social media, where he said police had raided the property, stopped ongoing preparations and arrested some of the staff.

Right now dozens of soldiers,police officers have surrounded my premises at One Love Beach Busabala where we were organising a show on Boxing day. Some staff arrested,sound and stage engineers being ordered to pull everything down despite the parlimantary resolution last week.

Meanwhile, a video has been shared online of Museveni endorsing a concert by Bebe Cool, who occassionally criticises Bobi Wine, and is a vocal supporter of the ruling party.

In the video, Museveni urges Bebe Cool to do music that advances the development of Africa, and wishes concert goers ‘a good time’.

‘‘I have heard that my son Bebe Cool has a concert on 26 December. His concert is dubbed ‘Heart of Gold’. I wish him all the best and hope he sings music that advances Africa’s development,’‘ Museveni says, using the local Luganda language.

At the height of protests demanding the release of Bobi Wine in September this year, fans attacked Bebe Cool at a concert, as public anger against Museveni and his supporters peaked.

Seems HEBobiWine doesn’t understand the “treason” he committed with his Nov. 10 Kyarenga Concert & and why his Boxing Day show is being blocked. He got easily the largest PAYING crowd in Ugandan history & KagutaMuseveni might never get such numbers even if he paid them. Shaah! pic.twitter.com/nMHOPdp62G

“Thy shall love Bebe Cool, as Bobi Wine is thy snake”.

So, says the Letter of Museveni to the Romans on Boxing Day. #BobiWine #NRM #M7 pic.twitter.com/rmijcXwdNA

It's the government giving Bobi Wine alot of attention ,imagine they ignored him and he held his concerts do you think he will overthrow the goverment

Bobi wine: God i want to be the President of Uganda

Bobi wine:Okay God, help me full fill the requirements needed to do a concert in Uganda

God:Do you want to be the President through a coup or an election?

I call upon all musicians who are slated to perform at Bebe cool's show in Kiwatule nt to perform today in solidarity to bobi wine's shut down show in Busabala. Performing on this Kiwatule is a clear indication that your endorsing this hatred and invasion of the arts to go on

Watch Video: Bobi Wine addresses journalists after Police sprayed pink water to disperse revellers who had gone to One Love Beach for his #BoxingDay concert #MonitorUpdates by Micheal Kakumirizi pic.twitter.com/LUPE7UKMlu