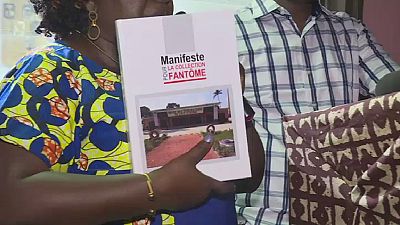 These sculptures in the Museum of Civilization in Abidjan, Côte d’Ivoire speak to tell the story of missing objects.

This is one of the ideas behind this exhibition on the “Ghost Collection”.

The aim is to foster the imagination and creativity while raising awareness to fight illicit trafficking of cultural properties.

I am sincerely proud to be part of this project because together I think we will say no to this looting. That's one way for me to say no, stop it.

Promoters of the exhibition also hope to use the museum to restore memories of African sculptures.

“When the museum was looted, it is true that all the curators, people who work at the museum, have always continued to tell the story of these objects. And when we thought about the Ghost Collection, we thought it would be interesting to work on the notion of storytelling and narrative as well”, said Fodé Sylla, promoter of the association of Arts without Africa.

“This idea of producing sound works, talking works, was the idea of restoring to objects their semantic dimension, their dimension… their context so that we consider that an art object is a statement and not an aesthetic object like that which is just right in a museum and when it has disappeared, when it is looted, there is nothing left”, said Raphael Tiberghien,teacher at the Visual Arts Department of Greater Paris South.

Despite the museum having nearly 15,000 objects, it lost 120 major pieces during the looting and chaos that reigned in Abidjan during the crisis.

Several students were involved in this project. Each created an integrated sculpture of a small loudspeaker diffusing a message or sounds, for this multi-day exhibition.

“I am sincerely proud to be part of this project because together I think we will say no to this looting. That’s one way for me to say no, stop it”, said Sangafolo Coulibaly, a student at the Technical Center of Applied Arts in Bingerville, Côte d’Ivoire.

Many amateurs were attracted to the theme of the exhibition.

For some visitors to the ghost collection sculpture exhibition in Abidjan this project is a first.