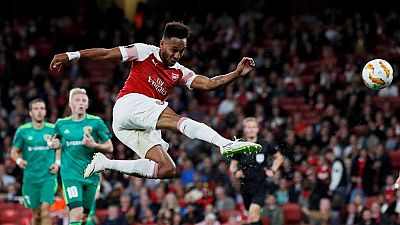 Aubameyang scored on 14 minutes from Saed Kolasinac’s cutback after a pass by Mesut Ozil who captained the Gunners for the Saturday afternoon clash. Aubameyang’s goal got Arsenal leading a premier league match at half-time for the first time this season.

When you’ve just gone back to the top of the premierleague goalscoring chart ? pic.twitter.com/a0xS5Kp63Q

He doubled Arsenal’s lead three minutes after the start of the second half with a thunderous finish into the top corner of the Burnley goal. It took his season tally to 15.

Nigerian Alex Iwobi scored Arsenal’s third in added time to get the London club back to winning ways after premier league and Qarabao cup losses to Southampton and Tottenham respectively.