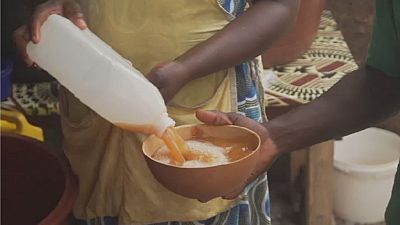 December in the Ghanaian capital, Accra, is devoted to merriment.

Holidays and parties afford locals an opportunity to raise their glasses of kokroko, pito, or hibiscus beer, all locally produced drinks which they savor to forget the heat in the tropics.

According to Raja Owusu, co-owner of Republic Bar “trying to move your business model for not relying on imported inputs is quite essential, specially these days. When the global competitive market bares such difficulty on your exchange rate situation.”

They like it because there are no chemicals in Pito. So when you drink it, you feel good, you are fine even if you are sick.

The liquor traditionally consumed in rural areas throughout Ghana is now available in trendy bars and restaurants in the capital with very high demands during Christmas.

Originally from the North of the country, the fermented drink is now resounding in the south. Consumers say their preference for locally made beverages is influenced by their affordability.

“When you compare the cost of it with other drinks too, this is way cheaper, but very good,” said Vincent Dindori, a Pito consumer.

67-year-old Veronica Dakurah, has concocted her famous pito, for more than 30 years, which she serves in calabashes and not in plastic bottles like her fellows do. It takes Veronica several hours to cook the delicacy.

“They like it because there are no chemicals in Pito. So when you drink it, you feel good, you are fine even if you are sick.”

The craze for local beverages has even spread to the beer market, traditionally dominated by large multinationals, an indication the market is promising.