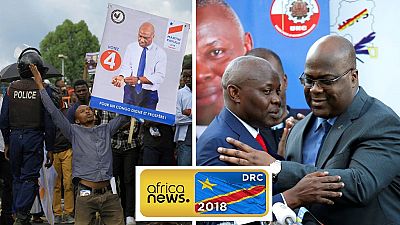 There will be a new leader at the helm of the political establishment in the Democratic Republic of Congo, DRC. With Kabila agreeing to step down, there is set to be a new face after about seventeen years.

It is election season and Congolese could have a rather subdued Christmas because of the politicking for elected posts – presidency, lawmakers, governors. New Year looks to be equally subdued now that the elections body has postponed the vote to December 30.

As expected the presidential is the big deal as opposition members weigh their chances in seeking to unseat the ruling coalition. The coalition has nominated ex minister Emmanuel Ramazani Shadary as its candidate.

Shadary is one of twenty-one others seeking to replace Kabila. Immediately after Kabila’s decision to go, there was talk of the need for a united opposition as the best way to thwart any efforts by Kabila to remain relevant even as ex-president.

After a series of talks with key candidates like Felix Tshisekedi, Vital Kemerhe, Martin Fayulu and two other aspirants, the Lamuka coalition was born in the Swiss capital, Geneva.

Lamuka – comprised the five aspirants plus Katumbi and Bemba, and was brokered by the Kofi Annan Foundation. Fayulu was named the consensus candidate but the consensus all but ‘crushed’ on take off.

Tshisekedi and Kamerhe, opted out in about 24-hours citing differences. No amount of appeals to rescind their positions could achieve a reversal. Fayulu insisted he was the best man and as things stand is leading Lamuka.

Weeks later, a new coalition is born. Let’s call it the Tshisekedi, Kamerhe alliance. It was announced in the Kenyan capital Nairobi.

The duo who abandoned Lamuka had agreed to pursue a joint bid for the seat in Kinshasa. Under the agreement, Felix will be the candidate with Kamerhe on cue to be named Prime Minister, if victory is achieved.

Tshisekedi is largely riding on the name of his deceased dad – Etienne – who led the main opposition UPDS for decades till be died in Brussels in early 2017. Kamerhe is also a political heavyweight and brings a lot to the ticket.

So even as the ruling coalition largely strategizes in Kinshasa on how to retain power, the opposition coalitions have chosen global capitals at least to announce their bid for ‘Mission Kinshasa.’

It is all down to the grounds now, the candidates have in the light of the coalitions reduced to eighteen. Each criss-crossing the vast expanse of the country – sub Saharan Africa’s largest – to canvass for votes with deadly incidents and accusations of intimidation along the way.

Coalitions have successfully won power (The Gambia and Liberia), even opposition parties have singlehandedly done so (Nigeria, Ghana, Sierra Leone) but so have coalitions failed, Kenya’s NASA.

Throw in the cases of insecurity, the controversial electronic voting and a bit of history, the DRC is a special case and the world awaits a special outcome – whatever that may be, that it be peaceful.