US announces over $900m critical investment in Somalia 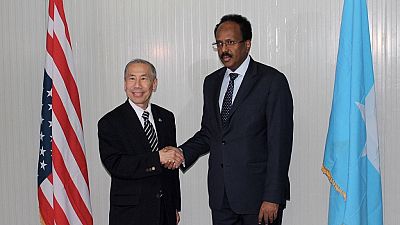 The United States Mission in Somalia has announced a critical investment in the Horn Africa nation disclosing that the amount involved could hit $900 million plus. The large chunk of the amount is to go into humanitarian assistance.

The announcement was contained in a statement issued by ambassador Donald Yamamoto on Tuesday stating that it was part of US efforts to create a better tomorrow for Somalis.

The US government along with its aid agency, USAID re-established permanent diplomatic presence in Mogadishu in early December after decades out. The move was preceded by Yamamoto’s appointment as ambassador, he took post in November 2018.

$420 million in life-saving humanitarian assistance to Somalia this year.

Creating more than 1,600 full-time, private sector jobs in the last 3 years.  (In the dairy sector alone, our support created nearly 500 full-time and 650 seasonal jobs.  We helped stop Irmaan Dairy from closing down; it now produces over 3,500 liters of milk daily.)

The United States is looking at airport and port upgrades to create trade and jobs.

Consideration of debt relief to attract development to Somalia.