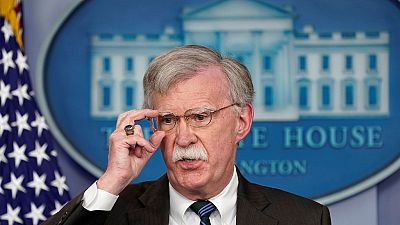 <p><strong>The Unites States on Thursday launched a new policy initiative for Africa, that emphasises accountability in trade and peacekeeping, as opposed to the ‘predatory’ Chinese and Russian involvement on the continent.</strong></p> <p>In a speech billed as unveiling a new US strategy on Africa, national security advisor John Bolton sounded the same notes as Trump’s “America First” philosophy with a distrust of international institutions and a sense of stark competition with rival powers.</p> <p>Bolton denounced China for its aggressive quest for natural resources and its rising military and maritime presence — warning that the balance of power in the Horn of Africa could shift to Beijing — and accused <a href="http://www.africanews.com/2018/10/18/geopolitics-russia-car-ties-signal-renewed-relationship-with-africa/"target="_blank">Russia</a> of using the continent to seek past imperial glory.</p> <p>“The predatory practices pursued by China and Russia stunt economic growth in Africa, threaten the financial independence of African nations, inhibit opportunities for US investment, interfere with US military operations and pose a significant threat to US national security interests,” Bolton said at the Heritage Foundation, a conservative think tank.</p> <p>China in particular has made dramatic inroads in Africa with direct investment, aid and infrastructure projects that leave partners burdened by heavy debt — and under long-term Chinese influence.</p> <a style="font-size:16px; font-color:yellow;" href="http://www.africanews.com/2018/09/03/china-promises-60-bn-aid-to-africa-as-2018-focac-summit-opens/"target="_blank"><span class="caps">READ</span> <span class="caps">MORE</span>: China promises $60 bn aid to Africa as 2018 <span class="caps">FOCAC</span> summit opens</a> <p>But at a time when the Pentagon wants to reduce its Africa footprint, the United States says its best weapon in the power struggle will be to build partnerships through trade.</p> <h2 style="font-size:16px;">Self-reliance over aid</h2> <p>Yet African governments will from now on find a tighter-fisted approach to traditional US aid, Bolton said, with an end to “indiscriminate assistance across the entire continent.”</p> <p>“All US aid on the continent will advance US interests, and help African nations move toward self-reliance,” Bolton said.</p> <p>Trump has vowed to slash foreign aid across the world and is not known for his interest in Africa, notoriously being quoted by lawmakers as calling African countries “shitholes” when discussing immigration to the United States.</p> <p>But Bolton said that the tycoon turned president’s “transactional history” of “making deals that are mutually beneficial” should be an encouraging sign to Africans.</p> <p>Bolton announced, with few immediate details, an initiative called “Prosper Africa” to boost US private sector investment across Africa with a goal of offering “high-quality, transparent, inclusive” trade.</p> <p>Bolton said the approach showed how the United States is “the least imperial power in the history of the world.”</p> <p>“In America’s economic dealings, we ask only for reciprocity, never for subservience,” he said.</p> <p>Bolton also warned that the United States was considering cutting off aid to South Sudan, which has benefited from US largesse since its independence in 2011, unless its “morally bankrupt leaders” end their internal fighting.</p> <h2 style="font-size:16px;">Criticism of UN peacekeeping</h2> <p>The competition with China and Russia comes as Washington prepares to <a href="http://www.africanews.com/2018/11/16/us-to-withdraw-10-percent-of-troops-in-africa-to-counter-russia-china/"target="_blank">dial down</a> its already modest military response to the spread of Islamist militant groups in Africa.</p> <p>Instead, Washington wants regional players to take more responsibility for their own security, with a view to boosting Washington’s use of softer power.</p> <p>Bolton cited as an example the so-called G5 Sahel — a security force backed by the United States which consists of Burkina Faso, Chad, Mali, Mauritania and Niger.</p> <p>But Bolton, known for his hawkish criticism of the United Nations, said that the United States would seek to “streamline, reconfigure or terminate” UN peacekeeping missions unless they “facilitate lasting peace.”</p> <p>“Our objective is to resolve conflicts, not freeze them in perpetuity,” he said.</p> <p>Bolton accused the world body of creating peacekeeping missions and then not looking further at how to resolve the underlying conflict.</p> <p>“We will not provide legitimacy to missions that give large payouts to countries sending poorly equipped soldiers who provide insufficient protection to vulnerable populations on the ground,” Bolton said.</p>