Here's why Uganda, Zimbabwe, Eritrea are 'cool places' to visit in 2019 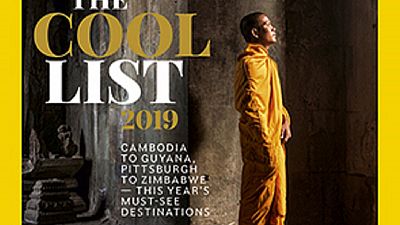 The much anticipated Cool List 2019, lists the must-see countries and cities for the year ahead.

‘‘Our team of editors, writers and industry experts have compiled the 19 destinations set to hit the headlines, with key openings, new routes and rising-star destinations,’‘ said Pat Riddell, the editor of National Geographic Traveler.

‘‘The Cool List 2019 includes stellar destinations such Eritrea, finally open to tourists after decades off-limits, and the buzzing arts scene of locations as wide-ranging as Hong Kong and West Yorkshire.”

Here’s what was said about the different African destinations;

And while there’s been economic and political turbulence, the safety of tourists hasn’t come into question.

Main attractions: Victoria Falls and the surrounding area have always enjoyed the lion’s share of the attention, and for good reason. As well as the beautiful falls themselves, the Zambezi flows through gorges and over rapids that are perfect for those after an adrenalin rush.

And don’t miss Zambezi National Park, three miles away. Just 10 years ago, you’d have been lucky to see anything but a few impala here, but the local anti-poaching unit has made enormous strides and the species list now includes four of the Big Five (only the rhino is missing).

READ MORE: Zimbabwe is more than just the Victoria Falls

Why now? Having struck new peace agreements with neighbouring Ethiopia and Djibouti, this little-visited African country is opening up to adventurous travellers as well as those with an eye for architecture.

Main attractions: Eritrea is a former colony of Mussolini’s Italy and its capital, Asmara, is a treasure trove of mid-century modernist architecture, where espressos, mopeds and vintage Fiats are as common as mojitos and Cadillacs are in Havana.

Beyond Asmara, Eritrea has intriguing towns and wilderness regions to discover. The Red Sea is barely two hours away; from the port of Massawa you can visit the Dahlak Archipelago for superb diving.

In July 2018, Ethiopian Airlines resumed its flights from Addis Ababa to Asmara for the first time in 20 years, meaning it’s now easy to visit both capitals in one trip.

Why now? British Airways recently launched direct flights from Heathrow to Durban, plus two new lodges are opening in the Hluhluwe–Imfolozi Park.

Main attractions: The beaches stretching for miles either side of Durban make KZN a viable winter sun hotspot, but the real appeal is in the wildlife.

Magical encounters with elephant herds and rescued rhinos in Hluhluwe-Imfolozi Park can be combined with nature cruises from St Lucia — the coastal town where wild hippos roam the streets.

The steady growth of its gorilla population is one of Africa’s great conservation success stories, with tourists playing an important role.

Almost 20 families can now be visited by guided groups of up to eight. Trekking fees raise funds not only for gorillas and their habitat, but also for Uganda’s other national assets including Queen Elizabeth and Murchison Falls National Parks, home to chimps, giraffes and hippos.

READ MORE: Ever been to Uganda, the ‘pearl of Africa’?

The other destinations on the cool list include Japan’s Setouchi, Antarctica, Pittsburgh, Corsica and Cambodia.