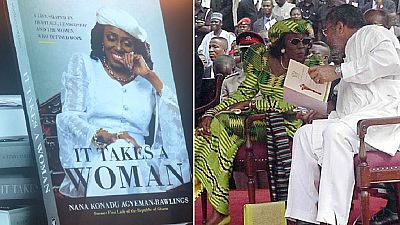 The book titled ‘It takes a woman,’ is the first of a four-part series Mrs Rawlings is set to publish. It has received top reviews among others by the late United Nations Secretary General, Kofi Annan.

The launch was attended by Ghana’s sitting vice-president Mahamoudou Bawumia and the First Lady, Rebecca Akufo-Addo.

I hope this first book of hers carries enough essentials even as we wait for mine and the additional two she intends to write.

Nana Konadu’s husband Jerry John Rawlings is Ghana’s longest serving leader of government having served a total of 21 years in the role.

JJ as he famously referred to commenting on the launch which he missed said it was a good first step in clarifying incidents that took place years ago. He also hinted of publishing his own memoirs in a Facebook post.

“Let us profit from the truth by taking it beyond mere academic exercises. If we cannot enrich our lives with it, then let us silently know and recognise those who have engaged in so much political, social, economic and judicial mischief and still continue to profit from it.

“So much falsehood has been peddled and fed to some of us for so long. I can only hope and pray that we are bold enough or capable of mustering courage to now face some hard truths.

“I hope this first book of hers carries enough essentials even as we wait for mine and the additional two she intends to write,” Rawlings said.

She was the first woman to successfully make it to the ballot paper since Ghana returned to multi party democracy in 1992.

Before joining the NDP, she was a vice chairman in the NDC. Her husband and former president, Jerry John Rawlings, ruled Ghana for almost two decades, first as a military ruler with the Provisional National Defense Council (PNDC) before overseeing Ghana’s transition to democracy in 1992.

Konadu over the period that her husband served as president (1992 – 2000) and even after his exit has been a strong champion of women and children affairs.

She is president of the 31st December Women’s Movement. – 31st December was the day her husband staged his second successful coup leading to the establishment of the PNDC regime.