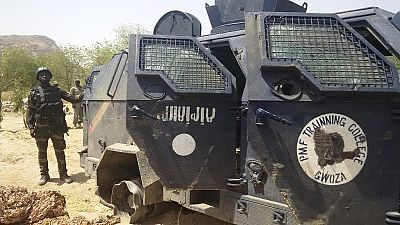 Cameroon’s security forces have confirmed that at least 29 people were injured in a suicide attack carried out on Wednesday by a woman in Amchidé, a Cameroonian town in the Far North region.

“A suicide bomber blew himself up this morning in Amchidé” and “29 people were wounded, some of whom were evacuated to Mora”, the largest city in the area, said a regional security official who requested anonymity.

“So far, no one has died as a result of his injuries,” the source added.

The region is regularly hit by jihadists from Boko Haram in neighbouring Nigeria.

A second female suicide bomber was shot dead by soldiers deployed in the city befoe she could detonate her bomb.

The attack occurred shortly before 08:00 (07:00 GMT) in the market of Amchidé, a town on the border with Nigeria, said a local self-defence committee official.

“There were many wounded. I have seen about twenty of them,” he said, adding that Wednesdays are generally big market days in Amchidé. “After the attack, the market emptied,” he continued.

An important commercial crossroads, Amchidé was the epicenter of the war between Cameroonian soldiers and Boko Haram fighters, which reached its peak in 2014.

After intense fighting, the army had managed to secure the city, where the Nigerian jihadist group had a retreat base. This had encouraged the gradual return of the inhabitants, almost all of whom had fled.

For several months, commercial activity paralysed by the war has resumed in Amchidé where no suicide attacks or large-scale attacks by Boko Haram had recently been reported.

Before the war, Amchidé had more than 90,000 inhabitants, today less than 15,000 people live there, including Nigerian refugees, according to local authorities.

Amchidé was classified as a “red zone” at the height of the war against Boko Haram in 2014. It has been the scene of violent fighting between jihadists and Cameroonian soldiers, the challenge for the army being to secure it and liberate the neighbouring Nigerian town of Banki, which remained under the control of the armed group for several months.

The jihadists had also managed to set up a camp in a district of Amchidé with a strong hold on Limani, a neighbouring town where almost all the houses reveal bullet holes.

After routing the jihadists, the Cameroonian army dug large and long trenches around and inside Amchidé to protect the city from further incursions by Boko Haram.