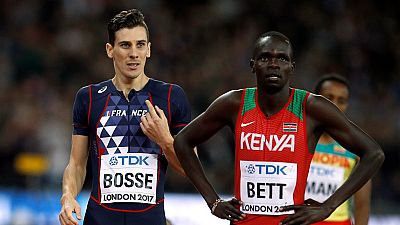 MedKenyan world 800 metres bronze medalist Kipyegon Bett has been handed a four-year ban for doping, the IAAF Athletics Integrity Unit said in a statement on Friday.

Bett, 20, refused to allow a urine sample to be taken in February and then in July, when a sample was taken, he tested positive for the prohibited substance Erythropoeitin (EPO), an endurance-boosting hormone, the integrity unit said.

Unless he appeals, Bett will be suspended until August 2022.

Unless he appeals, Bett will be suspended until August 2022.

The AIU handles integrity and doping issues for the International Association of Athletics Federations (IAAF).

Bett is the latest Kenyan to fail a drugs test. A World Anti-Doping Agency (WADA) report said between 2004 and Aug. 1, 2018, as many as 138 athletes from the east African nation tested positive for banned substances, 113 in competition.