WHO evacuates Ebola staff as violence intensifies in Beni 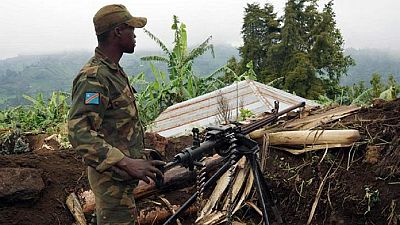 Sixteen World Health Organization (WHO) staff members mobilized against the Ebola epidemic in eastern DRC had to leave Beni where a shell hit the building they were occupying on Friday evening, during clashes between peacekeepers and rebels, WHO told AFP.

“It was in the exchanges of fire that the house received a shell. It was not a deliberate attack on the villa,” Dr. Michel Yao, Ebola coordinator in Beni, told AFP.

No one was injured, he said, without indicating who fired the shell. Last week, the Congolese military backed by the UN peacekeeping force launched an offensive against rebels of the Allied Democratic Forces (ADF) around Beni, eastern Democratic Republic of Congo.

It was in the exchanges of fire that the house received a shell. It was not a deliberate attack on the villa

This is the first time that WHO has had to evacuate personnel, even temporarily, since the outbreak of the Ebola epidemic was declared on 1 August in the highly dangerous Beni region.

The 16 members (out of a total of 191 WHO members in Beni) left on Saturday for Goma “to relieve stress” and awaiting a solution for their housing, according to Mr Yao.

“It’s a two-storey villa and the staff had taken refuge downstairs. The shell landed on the roof in one of the toilets,” he said, adding that some people are “traumatized.

Earlier Saturday, the Congolese Ministry of Health reported that the fight against the Ebola outbreak in Beni had been suspended after armed clashes the day before, “a few metres from the Emergency Operations Centre and hotels in which several teams are housed”.

On Friday evening, UN Mission in Congo (Monusco) peacekeepers repelled a new offensive attributed to the armed group ADF “after several hours of clashes” in the Boikene district, at the northern entrance of Beni, according to the Ministry of Health’s daily bulletin.

The Allied Democratic Forces (ADF), which has massacred hundreds of civilians since 2014 and killed at least seven peacekeepers this week in clashes, wanted to “attack one of the Monusco bases”, according to this official Congolese document.

Friday night’s clashes resulted in two houses and a car being burned about 100 metres from one of the hotels occupied by Ebola teams, according to an AFP correspondent.

“The Minister of Health, Dr. Oly Ilunga Kalenga, deplores these acts of violence (…). The epidemic remains dangerous, especially in Beni,” adds the Ministry of Health.

Historically Ugandan Muslim rebels who withdrew to eastern Congo in the 1990s, the ADF have been attacking the city of Beni since September, following massacres targeting mainly Oïcha in the north or roads and fields in the bush.

A tribute was paid Saturday in Beni to the six peacekeepers from Malawi and the Tanzanian peacekeeper killed this week in the offensive against the ADF conducted jointly with the Congolese army.

Fifteen Tanzanian peacekeepers were killed on 8 December last year in an attack on a UN base in the Beni region attributed to the ADF.

Elections are scheduled in the DRC on 23 December. Earlier this week, the UN representative in Congo, Leïla Zerrougui, said she was “increasingly alarmed” by the situation in Beni, worrying about the security situation that threatens the holding of elections in many parts of the eastern part of the country.