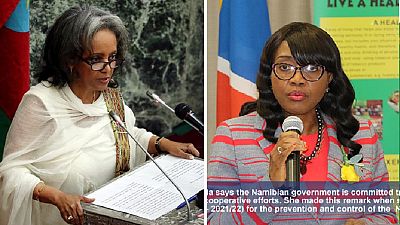 There is only one African woman as at November 2018 serving in the capacity of president. She is Ethiopia’s Sahle-Work Zewde.

In another sole woman political slot on the continent, the only female Prime Minister is Namibia’s Saara Kuugongelwa.

Africa is NOT a country and that is a point that most social media users have drummed home when western media reports or especially entertainers announce that they are going to Africa.

But to celebrate two women who are all but shining lights at the top political levels of governance, let’s say Africa were a country governed by women. Her president will be Ethiopian and her Prime Minister, Namibian.

She was nominated by Prime Minister Abiy Ahmed and approved by lawmakers in September to become president – the first womn occupant of the largely ceremonial role.

At the time of her appointment, Zewde was serving as an official of the United Nations at the African Union. She had just left the UN offices in Nairobi as its head.

She boasts a long record of service in the diplomatic arena. At the time of her appointment she was PM Abiy’s topmost female collaborator, he had only a week before appointed 10 women into a gender-par cabinet to much praise.

Full name, Saara Kuugongelwa-Amadhila, the Namibian PM had previously served as Minister of Finance from 2003 to 2015.

She became the southern African country’s fourth and first female Prime Minister having been sworn into office on 21 March 2015. Incidentally her deputy is also a woman, Netumbo Nandi Ndaitwah.

Under Namibian laws, the PM is appointed by the president, in this case Hage Geingob. The PM is leader of government and coordinates the work of cabinet.