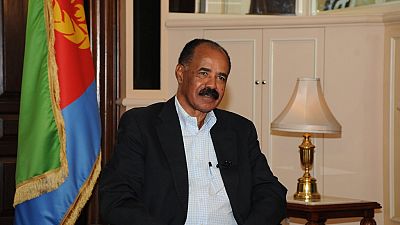 Eritrea’s president, Isaias Afwerki has paid tribute to the ‘steadfastness and resilience’ of his people, saying they have emerged triumphant against decades-old tribulation that few other people could have withstood.

Afwerki was addressing an interview broadcast live on state television and radio, as he sought to update the nation on the significance of regional developments like the peace deal with Ethiopia.

‘’(It) represents a new, fourth, epoch where external subterfuges of controlling the region have been vanquished through resilience of the Eritrean people,political dynamics in Ethiopia & global developments.”

Ethiopia and Eritrea signed a peace deal in July this year, ending two decades of hostilities over a border dispute.

Last week, it also emerged that sanctions imposed on Eritrea in 2009, are set to be lifted.

Afwerki said Eritrea will consolidate the new regional developments that have included normalisation of relations with Ethiopia, Somalia and Djibouti.

‘‘The new reality will have its own contribution to the shared visions of cultivation of solid cooperation in the wider Horn of Africa, the Nile Basin and the Arabian Gulf that is endowed with substantial resources, huge populations and considerable human capital,’‘ said Afwerki.

The president is expected to address the impact of the regional developments on the internal politics of the country.

Eritrea, for a long time imposed stringent measures including compulsory and indefine national conscription and repression of dissenting views, in the name of protecting the nation against an aggressive and powerful enemy, Ethiopia.

With the peace deal reached with Ethiopia, many human rights advocates have called upon Eritrea to reform. READ MORE: Eritrea pledges to address human rights challenges