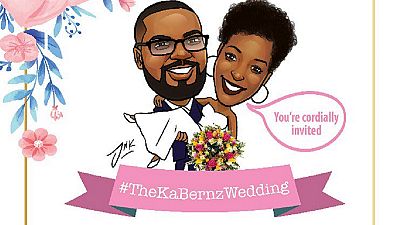 Two unconventional weddings celebrated over the last one month have sparked a debate in Uganda over the pressure facing young women to get hitched.

The #KaBernzWedding, which is happening today, is trending on Ugandan social media, following the decision by the ‘couple’ to use their wedding party to raise funds for another Ugandan bride, Jemimah Lulu.

Lulu made international headlines last month, when she reportedly married herself in a mock wedding.

The 32-year-old explained that she conducted the wedding ‘to deter pressure from her parents’, while at the same time bring attention to her crowdfunding campaign to raise university tuition.

Siima Sabiti, a celebrated media personality in Uganda, explained how Lulu’s relatable story influenced a random conversation with her friend Bernard Mukasa into the massive wedding being celebrated today.

‘‘My husband-to-be @mkbernz and I were having a random conversation on Twitter about marrying each other to get our families off our backs,’‘ Siima explained in a Twitter thread.

Within 24 hours, #TheKaBernzWedding was buzzing on Twitter, with different corporate companies offering their services for what was being called “the wedding of the year”. Here's how it all started… https://t.co/BhwFw6XZTX#TheKaBernzWedding

The wedding has attracted several coroporate sponsors, and guests will pay to help raise money for Lulu’s education.

Lulu needs to raise $12,000 to do a masters degree in creative writing at Oxford University in the United Kingdom.

Friends of the couple and sympathisers with Lulu’s cause have taken to social media to share their admiration and support for the unique concept of the wedding.

The conversations have also reignited the debate on why young women pursuing careers or education in the professional are constantly under pressure to get married at the expense of their dreams.

Generously, all proceeds will go toward my UniofOxford tuition fees.

#TheKaBernZWedding today is that long awaited day and the winners are mkbernz , kanyindo. And lulujemimah congratulations may all the independent people pick a leaf from u and never allow to be pressured into other things until they have archived the ultimate goal

I've just bought my online ticket thanks to Quicket! It rhymes even. ?? Woop! Got yours yet? #TheKaBernzWedding pic.twitter.com/kyxzuR4CmI

Siima and Bernz got tired of being asked about marriage and decided to marry each other. Like a good village Uganda is, many people decided to chip in and make it a reality. Proceeds from the wedding will go to Lulu, the lady who made news for marrying herself.