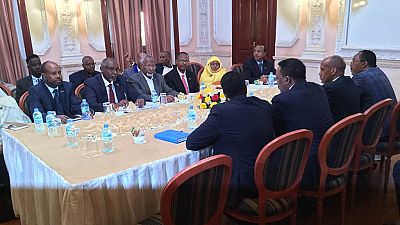 The Eritrean capital, Asmara, played host to yet another peace pact signing between the Ethiopian government and an erstwhile outlawed rebel group, the Ogaden National Liberation Front, ONLF.

The delegation from Addis Ababa was led by by foreign affairs minister Workneh Gebeyehu and the ONLF delegation was led by the Admiral Mohamed Omar Osman.

“The two sides have reached a historical agreement regarding the political rights of the people from Somali Regional State and genuinely addressing the root causes of the conflict between ONLF and the Ethiopian government,” ONLF said in a tweet.

“A joint committee has been established for further discussions,” the tweet added. Top leadership of the SRS were also present at the talks. Ahmed Shide, finance minister and leader of the SRS’s ruling party and Mustafa Omer, the regional president were also in Asmara.

ONLF had in September 2018 held first round of talks with representatives of the Ethiopian government but last the October 21, 2018 meeting sealed a deal that will see the group peacefully pursue its activities in Ethiopia’s eastern Somali Regional State, SRS.

Formed in 1984 amid a resurgence of separatist sentiment in the ethnically Somali Ogaden region on Ethiopia’s border with Somalia, many of its first members supported Mogadishu in its failed war with Addis Ababa over the region in the late 1970s.

Ethiopia accuses the ONLF of being terrorists supported by arch-foe and neighbor Eritrea, and launched an unprecedented offensive last year after a rebel attack on a Chinese-run oil field that killed more than 70 people.

The insurgents’ aims have varied over time, ranging from full-scale independence to joining a “Greater Somalia”, to more autonomy within ethnically diverse Ethiopia.

ONLF fighters, who do not wear uniforms and are estimated to number several thousand, take advantage of their close ties with the area’s largely nomadic communities. After hit-and-run attacks on military convoys, they often melt into villages and hide among herders when counter-attacks are threatened.

The separatist cause has been fuelled by widespread resentment at the region’s low level of development. Until Chinese engineers arrived late last year, the entire region had only 30 km (20 miles) of tarmac road, all of it around the regional capital Jijiga. The area has also been battered by a succession of droughts and floods.

Picture of the day. The leader of ONLFofficial and Somali region president #Mustefe. Both suffered under the notorious Abdi and things seem to be changing for good.addisstandard AddisZeybe pic.twitter.com/AtW1mIb6eX