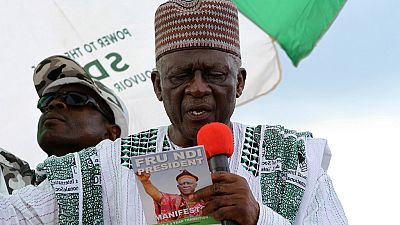 Cameroon’s veteran opposition leader, Ni John Fru Ndi was targeted by separatists who burnt his home, kidnapped his sister and shot at his driver, his lawyers said on Thursday.

Ndi heads the Social Democratic Front and comes from Cameroon’s troubled Anglophone west. While he has long opposed Biya’s rule, the separatists see him as a “traitor” because he is in favour of returning to a federalist solution in Cameroon.

Cameroon’s government is firmly opposed to any return to federalism, much less the creation of an independent anglophone state that separatists are fighting for.

Separatists “burnt (Fru Ndi’s) house” in the North-West, said lawyer Francis Sama, referring to one of Cameroon’s two English-speaking regions which have been hit by almost daily unrest that has left at least 400 dead this year.

“They kidnapped his younger sister,” he said at a hearing before the Constitutional Court, without giving further detail on either incident.

In a separate incident, the SDF said Fru Ndi’s driver had been shot at by the security forces after dropping the party leader home at the weekend. Without giving further details, they said he was “out of danger”.

The political crisis in the English-speaking west of the largely Francophone country erupted in 2016 and deteriorated into an armed separatist uprising last year which prompted a retaliatory crackdown by the security forces.

Sama’s remarks were made during a hearing at which three opposition candidates asked for the contested October 7 presidential election be annulled on grounds of massive fraud.

Fru Ndi has spent the past quarter of a century in opposition as head of SDF which he founded in 1990.

But although he ran for the presidency three times, Fru Ndi stood aside this time, letting his deputy Joshua Osih join the race against President Paul Biya who has ruled Cameroon for 36 years.

Separatist activists had called for a boycott of the election, but SDF decided to run.

Following the election, SDF’s Osih asked the court to scrap the ballot because “there was no presidential election” in the English-speaking regions where voting was disrupted and turnout was below five percent, the ICG think tank said.

Two other opposition candidates also joined the petition, Maurice Kamto of the Movement for the Rebirth of Cameroon and Cabral Libii, a TV news analyst and at 38, the election’s youngest candidate.

The Constitutional Council president, Clément Atangana, dismissed all petitions as inadmissible, declaring on Thursday night that ‘debates are over’.