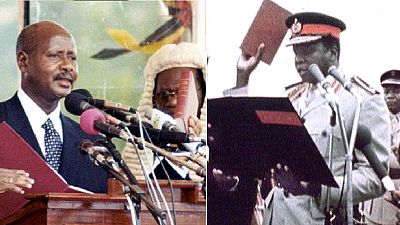 Bobi Wine, who according to local media reports is suffering a unofficial media blackout back home took on Museveni during an appearance on Citizen TV in Kenya.

“I did not see Idi Amin but I think Museveni is worse; he has misruled us longer than Idi Amin and he has messed up everything that Amin did; Idi Amin was a dictator but he did not destroy the infrastructure, he did not condone corruption,” the Kyadondo East MP averred.

He reiterated a position he made in a press conference back home that the president is drunk on power and that all his close associates were now praise singers, family and tribe members, a situation that had led to death of leadership.

He admits that there was a price of state brutality to be paid but insists that it was worth the struggle and also that he was certain that many like minded people were on board the mission to free Uganda.

Asked about the reality of harassment and persecution he replied: “Jeff, when I was coming out to represent the oppressed people, I knew what had happened to Kizza Besigye.

“I knew that many other people who even dared to speak out against Museveni, many of them are long buried, and many of them are suffering in incarceration, and yes, people like Dr. Kizza Besigye and other opposition leaders have had their fair share of brutalization.

“But I am also convinced that oppressed people cannot be oppressed forever, president Museveni was once not in power and was speaking exactly like I am speaking and president Obote always dismissed him, Obote is not president anymore.

Bobi Wine on access to the internet in Uganda #JKLive pic.twitter.com/1b5PG7UAKO

“…their plan was to kill me…” ~ Bobi Wine #JKLive pic.twitter.com/h4e3ycE6Nk

Former Uganda dictator Idi Amin died in 2003 at the King Faisal Specialist Hospital in Jeddah. Amin, blamed for the murder of tens of thousands of his people in the 1970s, died in the Saudi hospital where he had been critically ill for weeks.

“We can confirm that Mr Idi Amin has died from complications due to multiple organ failure,” said a senior source at King Faisal Specialist Hospital in the Red Sea city of Jeddah said at the time.