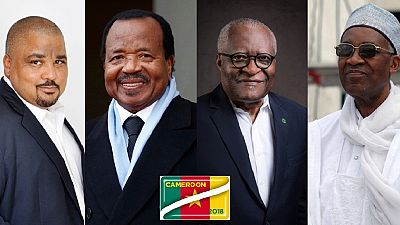 Cameroon will head to the polls on October 7, to decide who will captain the country for another 7 years.

According to an official list published by Elections Cameroon, 28 candidacy files were received by the commission that was charged with receiving files at the ELECAM headquarters and in Regional Delegations.

The elections governing body, ELECAM, on August 7, 2018 published a list of 9 candidates including the incumbent president, Paul Biya who is seeking another 7 years term to continue his 35 years rule over the country.

This year’s presidential poll seems to be very different from previous elections the country has witnessed considering the reduced number of candidates to take part in the elections and the insecurity which has plagued the country for over two years.

Get to know the Presidential Candidates

Biya will be facing political amateurs in the upcoming elections and an opposition which has failed despite several attempts to present a united front to challenge his candidacy.

Joshua Osih was picked on February 24 as the flag-bearer of the main opposition party, the Social Democratic Front, to replace Ni John Fru Ndi who has over the years been the strongest candidate to face Biya.

Akere Muna, and a host of others; Libii Li Ngue Cabril, Matomba Serge Espoir, Kamto Maurine and Njifor Afamwi will also be testing the waters for the very first time.

Paul Biya, Cameroonian native who hail from the South was born on 13 February 1933, in the village of Mvomeka’a.

He studied at the Lycée General Leclerc, Yaounde and the Lycée Louis-le-Grand, Paris and went on to the Institut des hautes études d’Outre-Mer where he graduated in 1961 with a Higher Education Diploma in Public Law.

He became a bureaucrat in his late 20’s under President Ahmadou Ahidjo.

He was Chargé de Mission at the Presidency of the Republic upon his return from Paris in October 1962 and Director of Cabinet of the Minister of National Education, Youth Affairs and Culture in January 1964.

While still serving as Director of the Civil Cabinet, Biya was appointed Secretary-General of the Presidency of the Republic in January 1968.

Following the creation of a unitary state in 1972, he became Prime Minister of Cameroon on 30 June 1975.

Ahidjo unexpectedly announced his resignation on 4 November 1982, and Biya accordingly succeeded him as President of Cameroon on 6 November.

In 2002 he was elected regional chairman of the Social Democratic Front for the South West region.

In 2012 and 2018 he was voted in both instances as 1st Vice Chairman of the party. At the 2018 Extra-ordinary convention of the party that concludes the party’s primaries, he was chosen as the SDF’s presidential candidate for the 2018 presidential election of Cameroon to be held in October 2018.

Osih holds an MBA in Leadership and Sustainability, and has more than 25 years of experience in the aviation industry, notably in operations and management.

His is an established entrepreneur in Cameroon and is the founder and managing director of the notable companies including Camport PLC and Africa Travel Management.

Osih is a Member of the Cameroon Parliament for the Wouri Centre constituency in Douala.

He is Deputy General Rapporteur in charge of state income, Vice Coordinator of the Hope for the Youth caucus, and a member of multiple parliamentary friendship groups.

Born on 9 December 1968, the 49-year-old lawmaker and native of the South West Region is married to Tina Osih with 3 sons.

Akere Tabeng Muna is a Cameroonian lawyer who was born on August 1952 in the North-West region of Cameroon.

He obtained a Bachelor of Science degree in International Relations in 1975 from the American University in Washington, D.C. and later moved to England, where he joined the Honourable Society of Lincoln’s Inn.

In 1997, he assumed the presidency of the Cameroon Bar Association after a landslide victory.

In 2000, Akere Muna founded the Cameroon chapter of the anti-corruption watchdog, Transparency International.

In 2004, Akere was elected to the Board of Directors of Transparency International and was later designated as the Coordinator of the Coalition of African Chapters of TI.

In 2005, he was elected Vice-Chair of the Board of Directors of TI and he stepped down in 2014, after serving the maximum number of terms.

He was thereafter appointed by the Board of Directors of TI as Chair of the International Anti-Corruption Conference (IACC) Council.

Akere Muna was a founding member of the Pan African Lawyers Union (PALU), and in July 2005, he was unanimously elected president of the organisation by the heads of the various African bar associations.

In September 2008, Akere Muna was president of ECOSOCC and in 2012, he became a member of the High Level Panel on Illicit Financial Flows from Africa, a body established by the United Nations Economic Commission for Africa

Akere Muna is married to Beverly Bird, and a father of two daughters, Lydia Muna and Kandi Muna.

He is the President of the Cameroon Democratic Union (UDC), an opposition party

He became Secretary to the Minister of Foreign Affairs from 1969 to 1970 and joined the faculty of law at the University of Yaoundé in 1970.

Njoya worked for the Carnegie Endowment for International Peace in Cameroon as director of the diplomatic training program from 1970 to 1972.

He was instrumental in the creation of the International Relations Institute of Cameroon (IRIC) where he served as its first director from 1972 to 1975.

He became a member of the Economic and Social Council of Cameroon in 1974, and he was then appointed as Deputy Minister of Foreign Affairs on 30 June 1975.

Dismissed from government in 1982, Ndam Njoya focused on his writing and teaching as well as donating his time to philanthropic endeavors.

He later served as a member of the Executive Bureau of UNESCO from 1985 to 1989, and was the President of the Jury of the Grand Prix of Literary Associations 2014.

Ndam Njoya was born at Njika, Foumban, West Province, Cameroon, on 8 May 1942.

He is a holder of an MA and a PhD degree in public international law and political science at the University of Paris (Panthéon).