Cameroon opposition fails to unite ahead of presidential poll 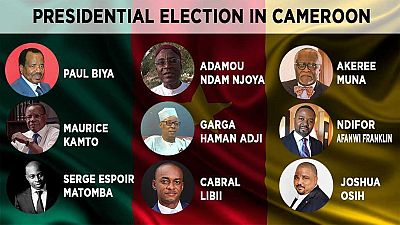 Eight candidates will be competing against the 85-year-old incumbent, Paul Biya in the upcoming presidential elections slated for October 7.

Cameroon’s opposition again failed to present a single presidential candidate which to many was the best way to challenge Biya’s 35-year-rule and bring his reign to an end.

Maurice Kamto, former Biya loyalist and leader of the Cameroon Renaissance Movement (MRC) had once initiated a coalition process with Akere Muna and the main opposition political party the SDF to discuss the possibility of a single candidate.

Kamto indicated that all parties had generally consented to a coalition, but none of them was ready to cede power to the other.

However, Akere had earlier stated that he was ready to support any candidate whose ideas and vision was superior to his given that the ultimate goal is to end decades of rule of Paul Biya. The SDF leaders on their part consider the party the only political force which stands a better chance defeat Biya.

With the failure of a coalition, pundits have it that these political “novices” will need more than an apt strategy if they want to beat Biya who has been in the race since 1992.

Akere, Kamto and six other candidates, Joshua Osih of Social Democratic Front (SDF); Cabral Libii of the National Union for Integration Towards Solidarity (UNIVERS); Ndifor Frankline of the Cameroon National Citizen Movement (CNCM); and Serge Espoir Matomba of the United People for Social Renovation (UPSR), are facing Biya for the very first time in this race, leaving many in doubt as to whether any of them stand a chance to top the race.